The U.K.’s 2Q Gross Domestic Product (GDP) report may spur a larger correction in the GBP/USD should the print drag on interest rate expectations.

Despite expectations of seeing another 0.8% advance in the growth rate, we may need a strong GDP print to prop up the GBP/USD as the Bank of England (BoE) continues to gauge the spare capacity in the U.K. economy. With that said, the advanced growth reading may also heavily influence the policy outlook as there appears to be a growing dissent within the Monetary Policy Committee (MPC).

The ongoing improvement in the labor market along with the expansion in the U.K. housing market may generate a better-than-expected GDP print, and a marked uptick in the growth rate may heighten the appeal of the sterling as it raises the BoE’s scope to lift the benchmark interest rate later this year.

Nevertheless, subdued wages paired with the slowdown in private sector consumption may drag on the growth rate, and a dismal 2Q release may generate a larger correction in the GBP/USD as market participants push back bets of seeing the central bank normalize monetary policy. 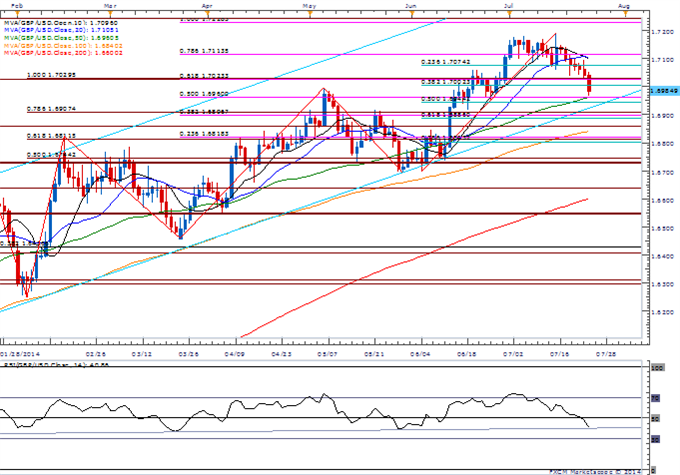 The U.K. economy grew another 0.8% during the first three-months of this year after expanding 0.7% during the fourth-quarter of 2013, but the lackluster GDP print may undermine the bullish sentiment surrounding the British Pound as it limits the Bank of England’s (BoE) to normalize monetary policy sooner rather than later. The sterling struggled to hold its ground following the weaker-than-expected GDP print, with the GBP/USD slipping below the 1.6800 handle, but the sterling firmed up during the North American trade to end the day at 1.6825.