- Core Inflation to Retain Fastest Pace of Growth Since October 2012.

The U.S. Consumer Price Index (CPI) may spur a bullish reaction in the U.S. dollar (bearish EUR/USD) should the report undermine the Fed’s dovish outlook for monetary policy.

Sticky price growth in the world’s largest economy may heighten the appeal of the greenback as it puts increased pressure on the Federal Reserve to move away from its easing cycle, and the next policy meeting on July 30 may generate an improved outlook for the reserve currency should a growing number of central bank officials show a greater willingness to normalize monetary policy sooner rather than later.

Higher input costs along with the pickup in wage growth may generate another stronger-than-expected inflation print, and an unexpected uptick in the CPI may fuel a near-term rally in the USD as it boosts interest rate expectations.

However, the persist slack in the real economy paired with the slowdown in private sector consumption may drag on price growth, and a weak inflation print may heighten the bearish sentiment surrounding the greenback as it gives the Fed greater scope to retain its highly accommodative policy stance for an extended period of time. 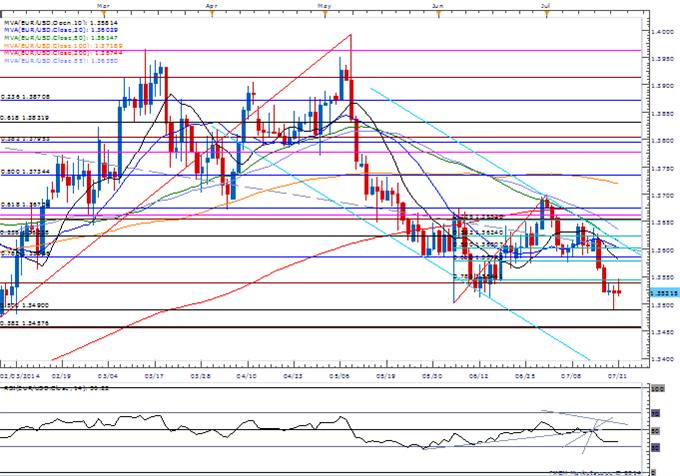 The headline reading for U.S. inflation unexpectedly climbed to an annualized 2.1% in May to mark the fastest pace of growth since October 2011, while the core Consumer Price Index (CPI) advance to 2.0% amid forecasts for 1.9% print. The stronger-than-expected print sparked a bullish reaction in the reserve currency, with the EUR/USD slipping below the 1.3550 region, and the greenback retained the gains throughout the North American session as the pair ended the day at 1.3545.