Heightening price pressures in New Zealand may push the NZD/USD to fresh record-highs as it puts increased pressure on the Reserve Bank of New Zealand (RBNZ) to take a more aggressive approach in normalizing monetary policy.

Indeed, RBNZ Governor Glenn Stevens may sound increasingly hawkish at the July 23 policy meeting as the faster recovery raises the risk for inflation, and the central bank may do little to halt the ongoing appreciation in the local currency as it helps to achieve price stability.

For Real-Time Updates and Potential Trade Setups on the New Zealand Dollar, sign up for DailyFX on Demand

Rising input prices along with the pickup in household confidence may encourage New Zealand firms to pass on higher costs, and a stronger-than-expected CPI print may heighten the bullish sentiment surrounding the kiwi as it fuels bets for additional rate hikes in the second-half of 2014.

Nevertheless, the headline reading for inflation may disappoint amid subdued wage growth paired with the slowdown in private consumption, and a dismal inflation print may spark a larger correction in the NZD/USD as it drags on interest rate expectations. 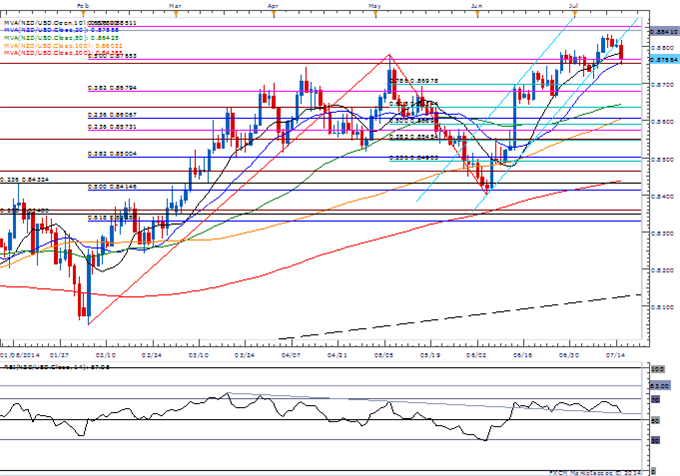 The headline reading for New Zealand inflation unexpectedly slowed during the first three-months of 2014, with the CPI figure slipping to an annualized 1.5% from 1.6% in the fourth quarter. The New Zealand dollar struggled to hold its ground following the dismal print, with the NZD/USD moving back below the 0.8600 handle, but the higher-yielding currency pared the losses during the North American trade to close at 0.8622.