- Core Rate of Inflation to Rise for the Third-Time This Year.

A pickup in the U.K.’s Consumer Price Index (CPI) may generate fresh monthly highs in the GBP/USD as it fuels expectations for a Bank of England (BoE) rate hike later this year.

The bullish sentiment surrounding the British Pound should gather pace in the second-half of the year as the BoE looks normalize monetary policy sooner rather than later, and the fundamental developments coming out of the region may continue to prop up interest rate expectations as a growing number of central bank officials adopt a more hawkish tone for inflation.

Expectations for a faster recovery paired with the ongoing improvement in the labor market may prompt a stronger-than-expected CPI print, and a marked pickup in the headline reading for inflation may generate a bullish reaction in the GBP/USD as it boosts interest rate expectations.

However, subdued wages along with the slowdown in private sector credit may drag on consumer prices, and a dismal inflation report may spur a larger correction in the GBP/USD as it dampens bets of seeing a rate hike later this year.

Weekly Price & Time: USD/JPY Inching Towards the Lows of the Year 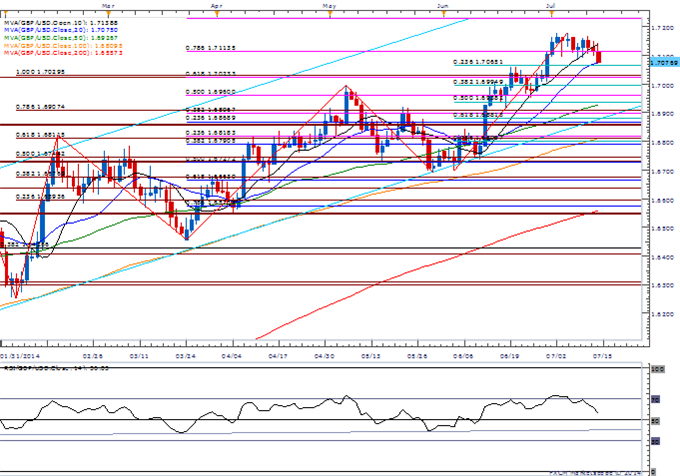 U.K. consumer prices slowed to an annualized 1.5% in May from 1.8% the month prior, while the core rate of inflation narrowed to 1.6% during the same period after expanding 2.0% in April, which marked the fastest pace of growth since August 2013. The British Pound struggled to hold its ground following the weaker-than-expected CPI print, with the GBP/USD slipping back below the 1.6950 region, but the sterling regained its footing during the North American trade, with the pair ending the day at 1.6990.