- Canada Employment to Increase Another 20.0K in June .

- Jobless Rate to Hold at an Annualized 7.0% for Second-Month.

Another 20.0K rise in Canada employment may trigger fresh monthly lows in the USD/CAD as it limit’s the risk of seeing the Bank of Canada (BoC) further embark on its easing cycle.

An upbeat job report may spur a material shift in the policy outlook as BoC Governor Stephen Poloz scales back his willingness to deliver another rate cut, and the central bank may adopt a more neutral tone for monetary policy as the rise in employment highlights an improved outlook for growth and inflation.

For LIVE SSI Updates Ahead of Canada’s Employment Report, Join DailyFX on Demand

The pickup in household spending along with the expansion in building activity may pave the way for a positive employment print, and a pickup in job growth may heighten the appeal of the Canadian dollar as it raises the BoC’s scope to normalize monetary policy sooner rather than later.

However, the data print may fall short of market expectations as businesses confidence wanes, and a dismal jobs report may generate a larger correction in the USD/CAD as it drags on interest rate expectations. 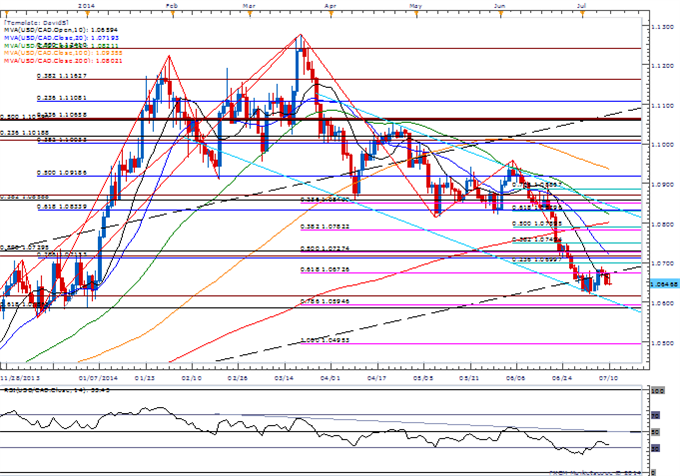 Price & Time: Where Are the Make or Break Levels in the Yen?

Employment increased 25.8K in May after the Canadian economy shed 28.9K jobs the month prior, while the jobless rate unexpectedly up ticked to an annualized 7.0% from 6.9% in April. Despite the better-than-expected print, the U.S. Non-Farm Payrolls (NFP) played a greater role in driving the USD/CAD as the exchange rate climbed to a daily high of 1.0947, but we saw the dollar-loonie consolidate ahead of the weekend as the pair closed at 1.0925.