- Australia Employment to Increase for Fifth Time in 2014.

- Jobless Rate to Uptick to an Annualized 5.9%- Highest Since February.

The AUD/USD may continue to retrace the decline from the beginning of the month as the Australian economy is expected to add 12.0K jobs in June.

However, an uptick in the jobless rate may spark a mixed reaction in the AUD/USD as the Reserve Bank of Australia (RBA) persistently highlight the ongoing slack in the labor market, and Governor Glenn Stevens may continue to toughen the verbal intervention on the Australian dollar in an effort to further assist with the rebalancing of the $1T economy.

The pickup in building activity may produce a strong rebound in employment as the central bank keeps the benchmark interest rate at the record-low, and the accommodative policy stance may continue to boost private sector activity as Governor Stevens expects a moderate recovery.

However, weakening demands at home and abroad may push businesses to scale back on hiring, and a dismal employment print may put increased pressure on the RBA to further embark on its easing cycle in an effort to encourage a stronger recovery. 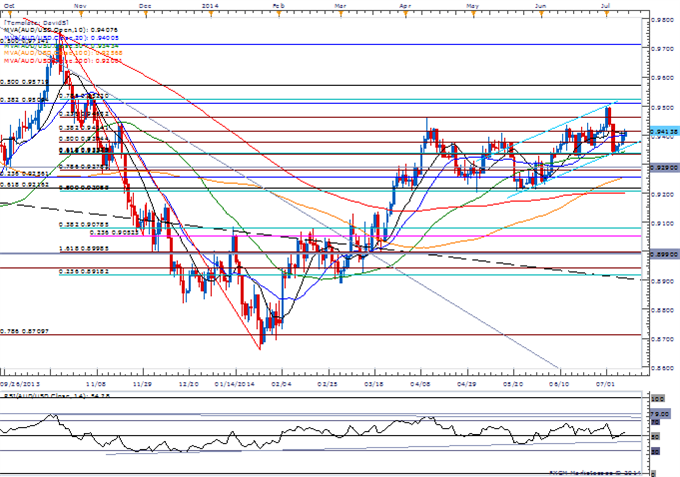 Employment in Australia unexpectedly slipped 4.8K in May to mark the first decline since December, while the jobless rate held steady at an annualized 5.8% for the third consecutive month. The weaker-than-expected print dragged on the Australian dollar, with the AUD/USD dipping below the 0.9350 region, but the market reaction was short-lived as the pair ended the day at 0.9422.