The EUR/USD may struggle to maintain the rebound from June should the European Central Bank (ECB) adopt a more dovish tone for monetary policy.

Indeed, ECB President Mario Draghi make a greater effort to weaken the Euro as the resilience in the single-currency heightens the threat for deflation, but the central bank may refrain from laying out a more detailed easing schedule as the central bank monitors the impact of negative deposit rates.

We may get more of the same from the ECB as the pickup in private sector consumption paired with the downtick in unemployment raises the fundamental outlook for the monetary union, and the EUR/USD may continue to appreciate in July should the Governing Council adopt a more neutral tone for monetary policy.

Nevertheless, the ECB may sounds increasingly dovish this time around amid the persistent weakness in private sector lending along with the downturn in confidence, and the Euro may come under increased pressure in the second-half of the year should the central bank show a greater willingness to implement the non-standard measures (T-LTRO & QE) ahead of schedule.

COT Positioning is Extreme Across the Board 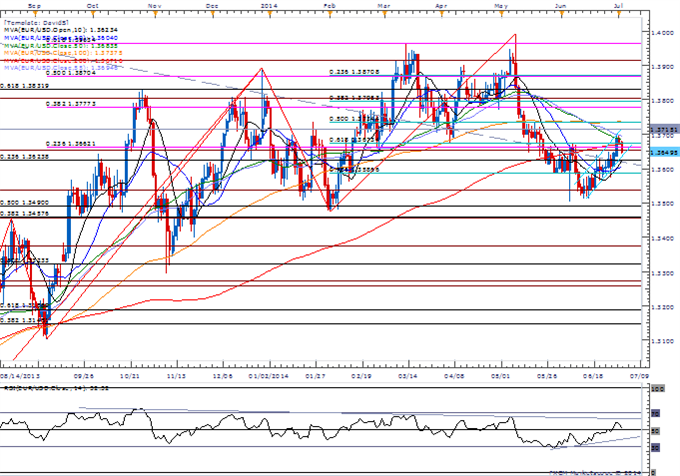 The European Central Bank pushed into uncharted territory as the Governing Council cut the benchmark interest rate to 0.15%, pushed deposit rates into negative territory, and saw scope for more non-standard measures (T-LTRO & QE) in an effort to stem the risk for deflation, while encouraging private-sector lending to small and medium-sized enterprises (SME). The EUR/USD tumbled to 1.3501 following the initial announcement, but the single currency traded higher following the press conference with President Mario Draghi as the central bank refrained from announced a detailed schedule for its easing cycle.