U.S. Non-Farm Payrolls (NFP) are projected to increase another 215K in June, but the European Central Bank (ECB) interest rate decision may spark a mixed reaction in the EUR/USD as market participants weigh the outlook for monetary policy.

Despite expectations of seeing the longest stretch of 200K+ prints since 1999-2000, it seems as though we would need a more meaningful pickup in job growth for the Federal Open Market Committee (FOMC) to soften its dovish tune for monetary policy, and the bearish sentiment surrounding the greenback may continue to take shape going into the Fed’s July 30 as Chair Janet Yellen remains reluctant to move away from the highly accommodative policy stance.

The pickup in private sector hiring along with the ongoing improvement in business confidence raises the scope for a better-than-expected NFP print, and a strong employment read may mitigate the bearish sentiment surrounding the USD as it puts increased pressure on the Fed to move away from its easing cycle.

However, the slowdown in private sector consumption paired with the persistent slack in the real economy may continue to drag on job growth, and a weak NFP figure may trigger selloff in the greenback as it raises the Fed’s scope to retain the zero-interest rate policy (ZIRP) beyond 2015. 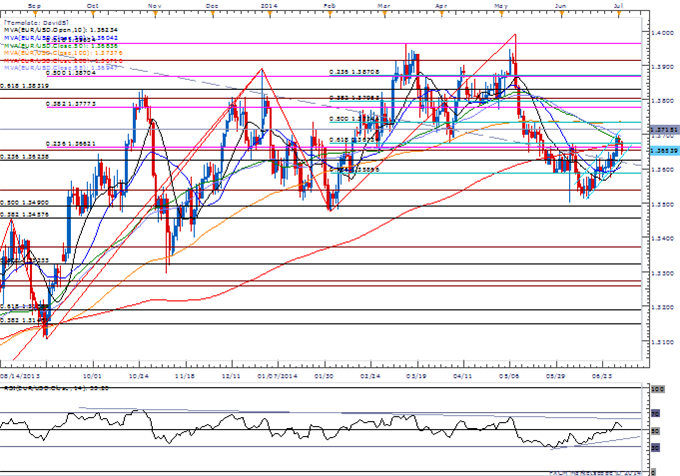 The U.S. economy added another 217K jobs in May following a revised 282K expansion the month prior, while the jobless rate unexpectedly held steady at an annualized 6.3% amid forecasts for a 6.4% print. Despite the downtick in unemployment, the EUR/USD climbed back above the 1.3650 region following the release, but the market reaction was short-lived as the pair ended the day at 1.3640.