- RBA to Preserve Current Policy for the Eighth Consecutive Meeting.

Even though the Reserve Bank of Australia (RBA) is widely expected to retain its current policy in July, the policy statement accompanying the interest rate decision may heavily impact the AUD/USD should the central bank alter its forward-guidance for monetary policy.

We may get more of the same from the RBA as Governor Glenn Stevens continues to see a period of interest rate ‘stability,’ but the central bank may toughen its verbal intervention on the Australia dollar as the resilience in the local currency undermines the outlook for growth and inflation.

The pickup in private sector activity along with the ongoing expansion in private sector credit may encourage the RBA to adopt a more upbeat tone for the $1T economy, and the AUD/USD may continue to track higher in July should the central bank retain a neutral outlook for monetary policy..

However, the RBA may increase its effort to talk down the exchange rate as the central bank continues to highlight the persistent slack in the real economy, and the aussie-dollar may face a larger decline during the summer months should Governor Stevens ramp up the verbal intervention on the Australian dollar. 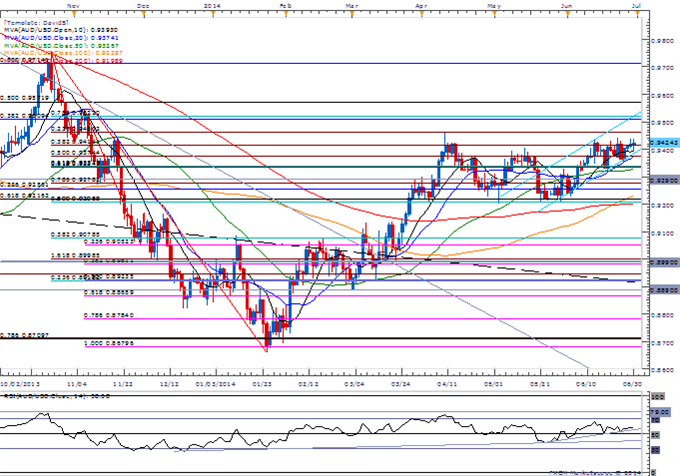 The RBA continued to strike a neutral tone for monetary policy as the central bank sees a period of interest rate ‘stability,’ but it seems as though market participants will continue to turn a blind-eye to the verbal intervention as Governor Glenn Stevens argues that the Australian dollar remains ‘high’ relative to the drop in commodity prices. As a result, the AUD/USD traded back above the 0.9250 following the rate decision, with the pair ending the day at 0.9262.

COT Positioning is Extreme Across the Board