A more meaningful decline in the growth rate may spark a bearish reaction in the greenback (bullish EUR/USD) as it gives the Federal Reserve greater scope to retain its highly accommodative policy stance, and the reserve currency may face additional headwinds throughout the summer months as central bank Chair Janet Yellen continues to endorse a dovish tone for monetary policy.

The ongoing slack in business outputs paired with the slowdown in housing activity may prompt a larger-than-expected decline in 1Q GDP, and a dismal print may generate a more meaningful rebound in the EUR/USD as the data drags on interest rate expectations.

However, stronger job growth along with the pickup in private sector credit may have helped to limit the downturn in economic activity, and a positive development may generate a bullish outlook for the greenback as it puts increased pressure on the Fed to normalize monetary policy sooner rather than later. 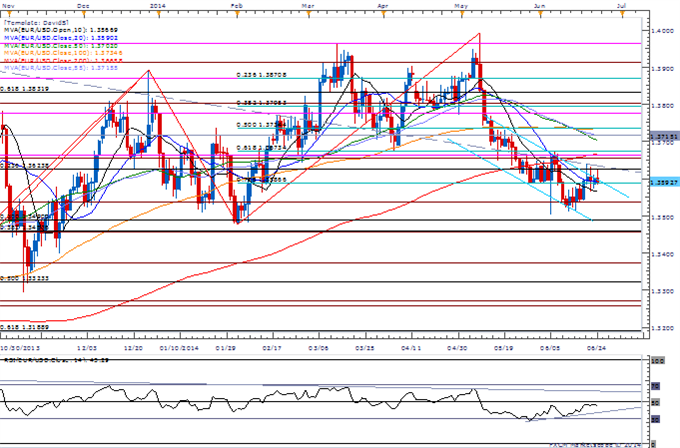 Impact that U.S. GDP has had on EUR/USD during the last quarter

The final 4Q GDP report showed an upward revision in the growth rate as the U.S. economy expanded an annualized 2.6% amid an initial forecast of 2.4%. The greenback struggled to hold its ground following the release as the EUR/USD climbed towards the 1.3775 region, but the dollar regained its footing during the North American trade, with the pair ending the day at 1.3739.