- Core Inflation to Fall Back From 2.0%- Marked Fastest Rate of Growth Since September.

A marked slowdown in the U.K.’s Consumer Price Index (CPI) may generate a larger pullback in the GBP/USD as it limits Bank of England (BoE) scope to normalize monetary policy sooner rather than later.

Nevertheless, the BoE Minutes due out later this week may reveal a growing dissent within the Monetary Policy Committee (MPC) as U.K. officials see a stronger recovery in 2014, and the market reaction to the U.K. CPI print could be short-lived should we see a growing number of central bank officials adopt a more hawkish tone for monetary policy.

U.K. firms may offer discounted prices amid weak wage growth paired with the slowdown in private sector credit, and a weak inflation print may undermine the near-term outlook for the GBP/USD as it drags on interest rate expectations.

Nevertheless, the resilience in private sector consumption along with the ongoing improvement in the labor market may limit the downside risk for price growth, and a stronger-than-expected CPI print may heighten the bullish sentiment surrounding the sterling as it fuels bets for a rate hike.

COT: Euro Speculators are Now Most Short Since Last June 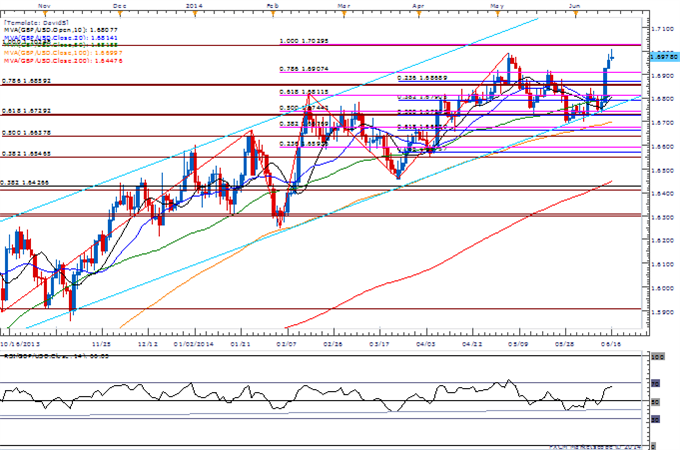 U.K. consumer prices increased an annualized 1.8% in April after expanding 1.6% the month prior, while the core rate of inflation climbed 2.0% to mark the fastest pace of growth since September. Despite the stronger-than-expected CPI print, the GBP/USD slipped below the 1.6825 region following the release, but the British Pound pared the decline during the North American trade to close at 1.6836.