Another decline in U.K. Jobless Claims may prompt a near-term advance in the GBP/USD as it puts increased pressure on the Bank of England (BoE) to normalize monetary policy sooner rather than later.

Indeed, the BoE Minutes due out on June 18 may highlight a growing dissent within the Monetary Policy Committee (MPC) as the central bank continues to see a stronger recovery in 2014, and the bullish sentiment surrounding the British Pound may gather pace in the second-half of the year should we see a growing number of BoE officials adopt a more hawkish tone for monetary policy.

The ongoing expansion in private sector consumption along with the rise in business outputs may generate a larger-than-expected decline in unemployment, and an upbeat labor report may pave the way for a higher-high in the GBP/USD as it raises the fundamental outlook for the U.K. economy.

However, sticky inflation paired with the slowdown in private lending may drag on hiring, and a dismal jobless claims report may spur a larger correction in the GBP/USD as it drags on interest rate expectations.

COT: Euro Speculators are Most Short Since July

EURUSD or GBPJPY - Which is the Better Risk Correction Setup 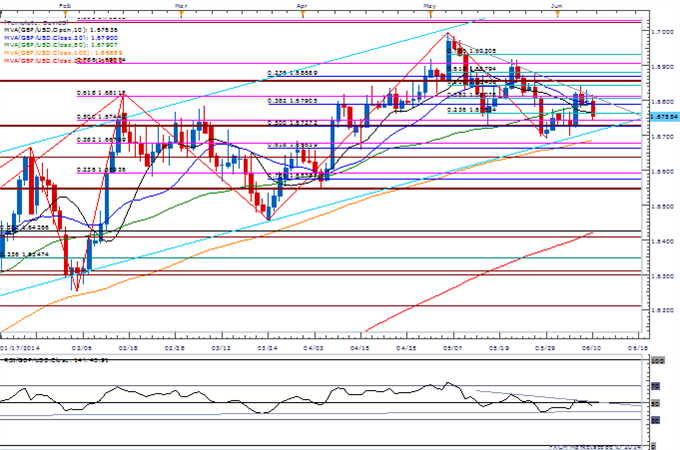 Impact that the U.K Jobless Claims report has had on GBP during the last release

U.K. Jobless Claims fell another 25.1K in April following the 30.6K contraction the month prior, while the ILO rate narrowed to an annualized 6.8% from 6.9% to mark the lowest reading since February 2009. Nevertheless, the GBP/USD traded lower as the print missed market expectations, and the British Pound weakened further throughout the day as the Bank of England Inflation report dampened bets of seeing the central bank normalize monetary policy ahead of schedule.