U.S. Non-Farm Payrolls (NFP) are projected to increase another 215K in May, but the data print may spur a mixed reaction in the EUR/USD as the jobless rate is expected to widen to an annualized 6.4% from 6.3% the month prior.

Despite the ongoing improvement in the labor market, it seems as though the Federal Open Market Committee (FOMC) will stick to its current approach at the June 18 meeting, and we would need to see a marked pickup in NFPs to see a material shift in the Fed’s policy outlook at Chair Janet Yellen remains in no rush to normalize monetary policy.

The ongoing improvement in business sentiment along with the resilience in private sector consumption may encourage U.S. firms to further expand their labor force, and a positive development may spur a bullish reaction in the greenback as it puts increased pressure on the Fed to move away from its highly accommodative policy stance.

Nevertheless, the rise in planned job-cuts paired with the persistent slack in the real economy may ultimately generate a disappointing labor report, and a dismal print may heighten the bearish sentiment surrounding the reserve currency as it drags on interest rate expectations. 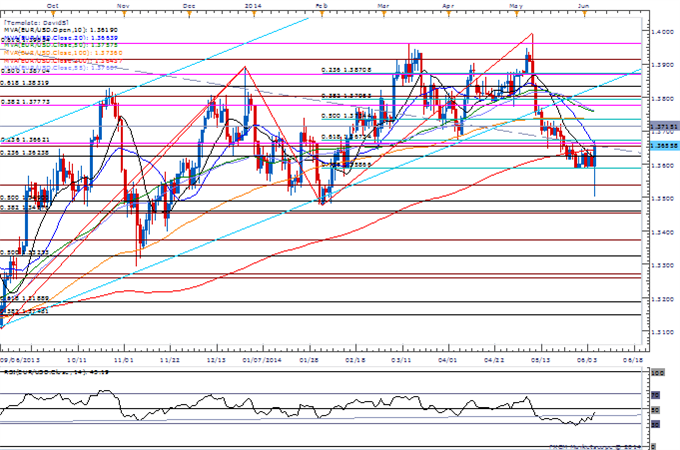 U.S. Non-Farm Payrolls increased 288K in April following a revised 203K rise the month prior, while the jobless rate unexpectedly slipped to an annualized 6.3% from 6.7% as discouraged workers continued to leave the labor force. The better-than-expected NFP print pushed the EUR/USD back down towards the 1.3800 handle, but the market reaction was certainly short-lived as the pair ended the day at 1.3871.