The EUR/USD may face a sharp selloff over the next 24-hours of trade as market participants see the European Central Bank (ECB) pushing monetary policy into uncharted territory.

Beyond expectations for a rate cut & negative deposit rates, the ECB may also look to implement more non-standard measures in an effort to increase lending to small-and-medium sized enterprises (SME), but the bearish sentiment surrounding the single-currency may end up being short-lived should central bank President Mario Draghi scale back his willingness to further embark on the easing cycle.

The growing threat for deflation paired with the ongoing contraction in private sector credit may prompt the ECB to implement a range of tools to address the weakening outlook for the monetary union, and the EUR/USD may test fresh yearly lows over the near-term should central bank leave the door open for more easing.

Nevertheless, the downtick in unemployment paired with improvement in confidence may encourage the ECB to further delay its easing cycle, and a rate cut alone may present a buying opportunity for the EUR/USD as market participants have already priced-in a reduction in the benchmark interest rate.

Price & Time: The EUR/USD Fork in the Road 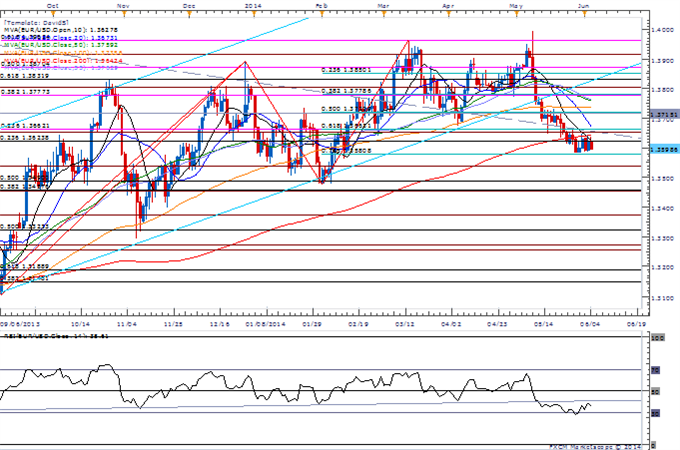 The European Central Bank kept the benchmark interest rate on hold in May as the central bank continues to see a gradual recovery in the monetary union, but it seems as though the Governing Council is showing a greater willingness to implement additional monetary support in the coming months as President Mario Draghi highlights a greater risk for deflation. Despite the initial market reaction to the ECB rate decision, speculation for more easing dragged on the EUR/USD, with the pair closing the day at 1.3838.