The Australian economy is expected to grow another 0.9% during the first three-months of 2014, and a pickup in 1Q GDP may generate a near-term rally in the AUD/USD as the pair continues to consolidate above the 0.9200 handle.

Indeed, a positive GDP report may heighten the appeal of the Australian dollar as the Reserve Bank of Australia (RBA) retains a rather neutral tone for monetary policy, and Governor Glenn Stevens may continue to talk down bets for a rate cut as the central bank head remains upbeat on the $1T economy.

The ongoing expansion in the housing market along with the pickup in employment may prompt a strong pickup in 1Q GDP, and a positive development may raise the scope for a bullish breakout in the AUD/USD as it fuels interest rate expectations.

Nevertheless, the marked decline in 1Q inventories paired with the persistent weakness in private sector consumption may spur a slowdown in the growth rate, and a dismal GDP print may spur a key break below near-term support as it dampens the fundamental outlook for the Australian economy. 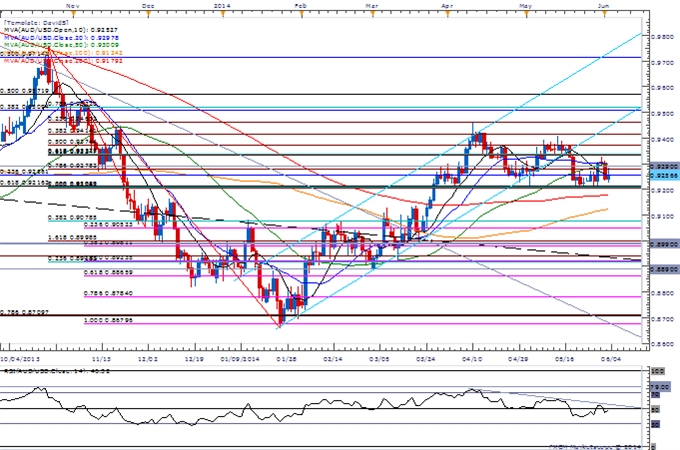 The Australian economy grew another 0.8% during the last three-months of 2013 following the 0.6% expansion in the third-quarter, and the faster recovery may heighten the appeal of the Australian dollar as it limits the RBA’s scope to further embark on its easing cycle. Despite the limited initial reaction to the 4Q GDP print, the AUD/USD regained its footing going into the European trade, with the pair closing the day at 0.8983.