- RBA to Preserve Current Policy for the Eighth Consecutive Meeting

The Reserve Bank of Australia (RBA) is widely expected to keep the benchmark interest rate at 2.50% in June, but the AUD/USD may struggle to hold above the 0.9200 support zone should the central bank adopt a more dovish tone for monetary policy.

Given the resilience in the Australian dollar, Governor Glenn Stevens may take a more aggressive approach in weakening the higher-yielding currency as market participants continue to ignore the verbal intervention, and the AUD/USD may face a more material decline over the next 24-hours of trading should the RBA favor additional tools to drive the exchange rate lower.

The threat of an asset-bubble paired with the ongoing improvement in the labor market may prompt the RBA to adopt a more upbeat tone for the $1T economy, and the AUD/USD may continue to build a near-term base around the 0.9200 support zone should the central bank highlight an improved outlook for growth and inflation.

However, the RBA may sound more cautious this time around amid the persistent decline in inventories along with the slowdown in private sector consumption, and the AUD/USD may face a larger decline in June should Governor Stevens show a greater willingness to further embark on the easing cycle. 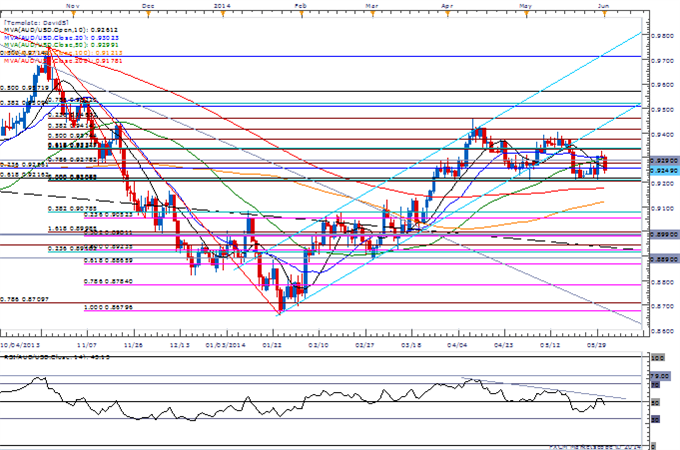 As expected, the RBA stuck to its current policy in April as Governor Stevens continues to see a likely period of ‘interest-rate stability,’ while the central bank warned that the exchange rate remains high by historical standards amid the rebalancing of the real economy. Despite the limited market reaction to the interest rate decision, the AUD/USD pushed back above the 0.9300 during the European session, with the pair ending the day at 0.9340.

COT Positioning of Interest in AUD, JPY, and MXN