Canada’s 1Q GDP report may spur a meaningful rebound in the USD/CAD should we see a marked slowdown in the growth rate.

A dismal GDP report may instill a bearish outlook for the Canadian dollar as Bank of Canada (BoC) Governor Stephen Poloz keeps the door open to further reduce the benchmark interest rate, and the central bank head may continue to endorse a dovish outlook for monetary policy amid the persistent slack in the real economy.

The slowdown in private sector consumption along with the ongoing weakness in the labor market may spur a lackluster GDP print, and a dismal development may spur a bullish breakout in the USD/CAD as it raises bets for a BoC rate cut.

Nevertheless, the ongoing expansion in the housing market paired with the rebound in building activity may produce another GDP reading above 2.0%, and a better-than-expected print may generate a further decline in the USD/CAD as the pair remains the bearish trend carried over from March. 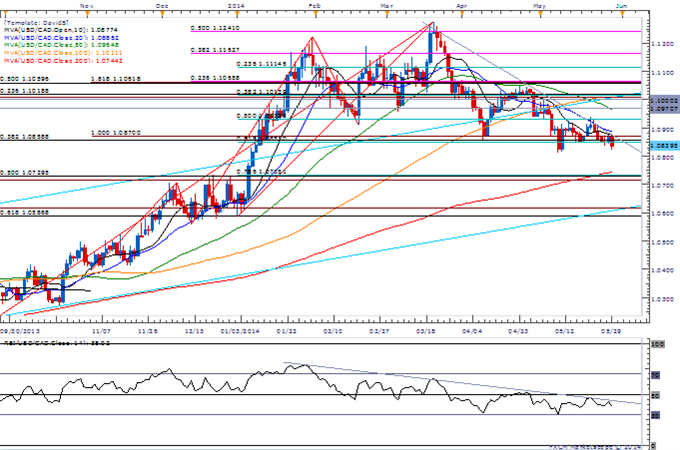 Price & Time: Looking For A Range Low In NZD/USD Next Week

Euro and Gold Prices Near Critical Levels - What’s the Next Move?

The Canadian economy grew at a faster pace during the last three-months of 2013, with the growth rising another 2.9% following the 2.7% advance in the third-quarter, and the data print may encourage an improved outlook for the Canadian dollar as it raises the outlook for growth and inflation. The USD/CAD slipped back below the 1.1100 handle following the stronger-than-expected GDP print, with the pair ending the day at 1.1064.