- Personal Consumption to Increase More Than 3% for Second Straight Quarter

The preliminary U.S. 1Q GDP report may spur a near-term rebound in the EUR/USD as the growth rate is expected to contract 0.5% during the first three-months of 2014.

Indeed, a marked downward revision may undermine the near-term rebound in the dollar as it gives the Federal Reserve greater scope to further delay its exit strategy, and the greenback may struggle to hold its ground ahead of the next policy meeting on June 18 should the data print drag on interest rate expectations.

Subdued wage growth paired with sticky inflation raises the risk of seeing a larger-than-expected contraction in the U.S. economy, and a dismal print may spark a rebound in the EUR/USD as the dampens the prospects for a stronger recovery in 2014.

Nevertheless, the resilience in private sector consumption paired with the ongoing improvement in the labor market may generate an upbeat GDP report, and a positive development may trigger fresh monthly lows in the EUR/USD as it raises the outlook for the U.S. economy.

Join DailyFX on Demand for Full Coverage of the U.S. GDP Report! 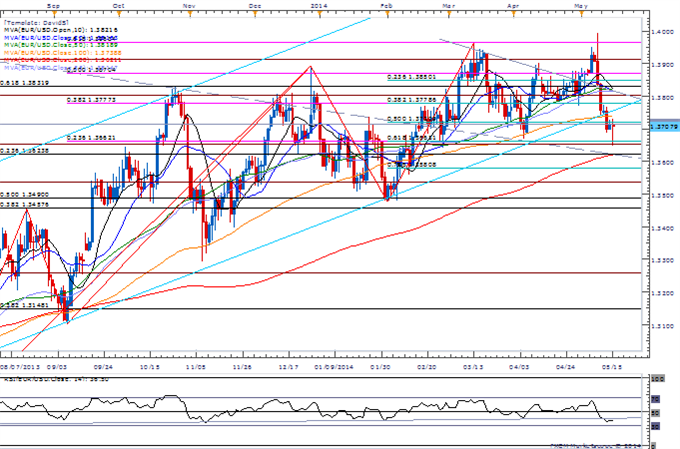 Price & Time: USD Advance Getting Long in the Tooth?

Impact that the U.S. GDP report has had on EUR/USD during the last quarter

The preliminary 4Q GDP showed a downward revision in the growth rate, with the world’s largest economy expanding an annualized 2.4% during the last three-months of 2014, while Personal Consumption increased 2.6% during the same period after climbing 2.0% in the third-quarter. Despite the weaker-than-expected GDP print, the EUR/USD failed to hold above the 1.3800 handle during the U.S. trade, with the pair ending the day at 1.3798.