- Is There a Growing Dissent in the Monetary Policy Committee (MPC)?

The Bank of England Minutes may generate a more meaningful advance in the GBP/USD should we see a growing number of central bank officials show a greater willingness to normalize monetary policy sooner rather than later.

The policy statement may show a growing dissent within the BoE as the fundamental developments coming out of the U.K. raise the prospects for a stronger recovery, and the fresh batch of central bank rhetoric may pave the way for fresh highs in the GBP/USD should the committee adopt a more hawkish tone for monetary policy.

Sticky price pressures paired with the ongoing pickup in private sector activity may put increased pressure on the BoE to raise the benchmark interest rate ahead of schedule, and the GBP/USD may continue to carve higher highs & higher lows in the second-half of the year as the central bank moves away from its easing cycle.

However, the persistent slack in the real economy may keep the BoE on the sidelines as Governor Mark Carney retains a cautious outlook for the region, and the GBP/USD may face a larger correction in the days ahead should the policy statement drag on interest rate expectations. 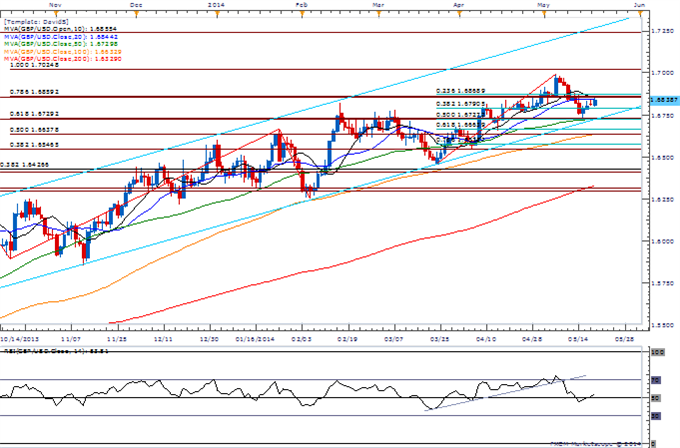 The BoE voted unanimously to retain its current policy in April as the central bank sees a stronger recovery in 2014, but the British Pound failed to benefit from the meeting minutes as the MPC talked down the threat for inflation. In turn, the GBP/USD slipped back below the 1.6800 handle, with the pair trailing lower throughout the North American trade to end the day at 1.6779.