- Core Inflation to Rise 1.8%- Fastest Rate of Growth Since November.

A marked rebound in the U.K.’s Consumer Price Index (CPI) may pave the way for fresh highs in the GBP/USD as it puts increased pressure on the Bank of England (BoE) to normalize monetary policy sooner rather than later.

Indeed, the BoE Minutes may reveal a growing dissent within the Monetary Policy Committee (MPC) as U.K. officials anticipate a stronger recovery in 2014, and heightening price pressures may boost the bullish sentiment surrounding the British Pound as it spurs a more material shift in the policy outlook.

For Real-Time Updates and Potential Trade Setups on the Japanese Yen, sign up for DailyFX on Demand

The ongoing pickup in household sentiment along with the resilience in retail sales may push U.K. firms to ramp up consumer prices, and a sharp uptick in the headline reading for inflation should foster a bullish reaction in the GBP/USD as it fuels interest rate expectations.

Nevertheless, efforts to cool the house paired with the persistent slack in the real economy may continue to dampen the outlook for price growth, and a dismal CPI print may generate a larger correction in the GBP/USD as market participants scale back bets of seeing higher borrowing costs ahead of schedule. 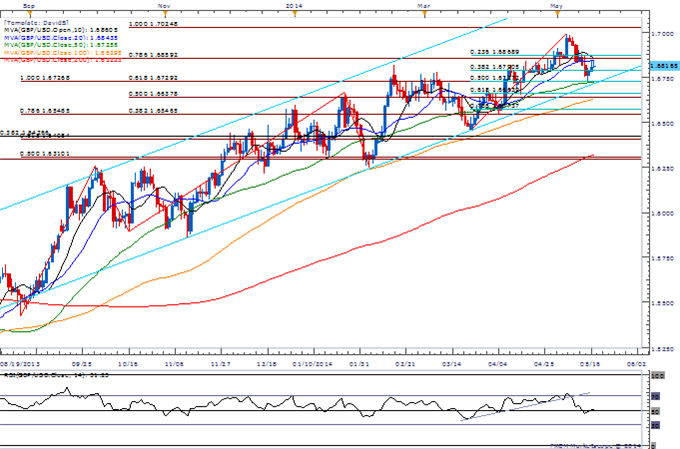 U.K. consumer prices increased an annualized 1.6% in March after expanding 1.7% the month prior, while the core rate of inflation grew 1.6% during the same period to match the slowest pace of growth for 2014. Despite the slowdown, the in-line CPI prints pushed the GBP/USD back above the 1.7000, with the pair ending the day at 1.6723.