The advance GDP report is expected to show Europe’s largest economy expanding at a faster pace during the first three-months of 2014, and a marked pickup in the growth rate may encourage a more meaningful rebound in the EUR/USD as it dampens the threat for deflation.

Despite expectations of seeing the European Central Bank (ECB) further embark on its easing cycle, an upbeat GDP reading may boost the appeal of the single currency ahead of the next interest rate decision on June 5, but the EUR/USD face additional headwinds in the second-half of the year as President Mario Draghi shows a greater willingness to implement more non-standard measures.

The ongoing improvement in the labor market paired with the rise in household and business confidence may generate a better-than-expected GDP report, and a marked rise in the growth rate should spur a bullish reaction in the EUR/USD as it raises the fundamental outlook for the monetary union..

However, the slowdown in domestic demands along with the weakening outlook for global trade may raise the risk for a protracted recovery, and a dismal print may heighten the bearish sentiment surrounding the single currency as it puts increased pressure on the ECB to further embark on its easing cycle. 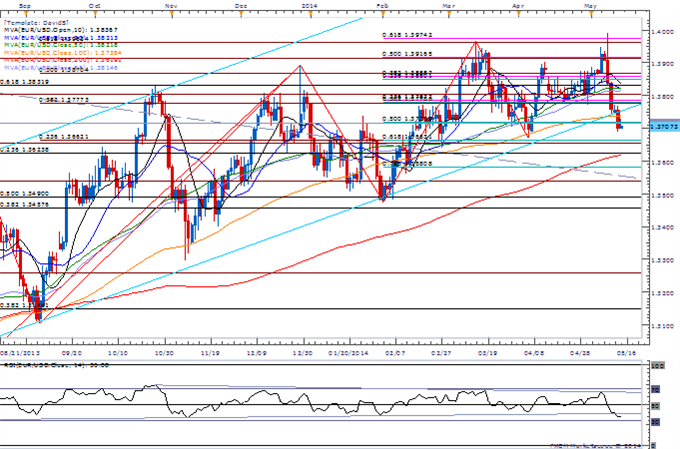 Join DailyFX on Demand to Cover Current Trade Setups on the Euro! 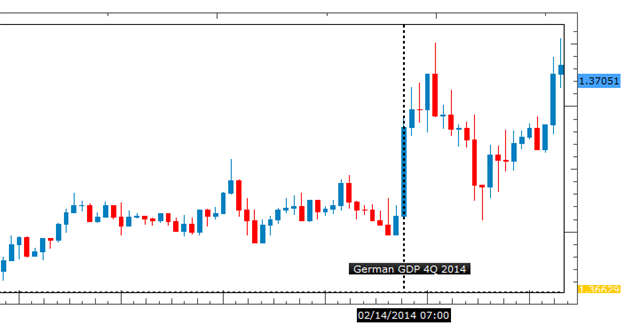 German GDP came in a tenth of a percent better than expected at the 4Q preliminary print and the Euro edged up slightly against the greenback. The first quarter preliminary figure is likely to cause more volatility and possibly greater follow through on price action as the Euro resides between a rock and a hard place. Any pronounced weakness in the print is likely to prompt Euro weakness across the board as June speculation of ECB action ramps up following Draghi’s comments last week.