According to a Bloomberg News survey, 56 of the 58 economists polled anticipate the European Central Bank (ECB) to retain its current policy in May, but the EUR/USD may struggle to hold its ground should President Mario Draghi show a greater willingness to further embark on the easing cycle.

Why Is This Event Important:Indeed, the ECB is coming under increased pressure to implement more non-standard measures amid the persistent threat for deflation, and we may see the central bank lay the groundwork to ease policy further in the coming months as the Governing Council struggles to achieve its one and only mandate to preserve price stability.

Subdued price growth paired with the ongoing contraction in private sector lending may prompt the ECB to adopt a more dovish outlook for monetary policy, and we may see the EUR/USD give back the advance from the beginning of the month should the fresh batch of central bank rhetoric drag on interest rate expectations.

However, the ECB may stick to the sidelines amid the positive developments coming out of the monetary union, and the EUR/USD may continue to carve higher highs & higher lows in May should the central bank remain reluctant to implement more non-standard measures. 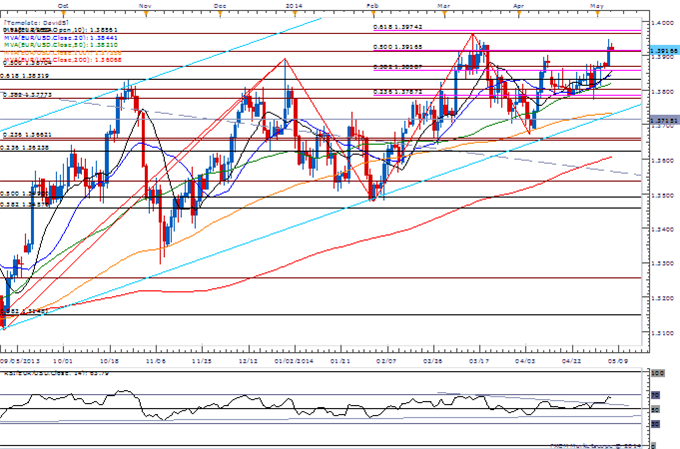 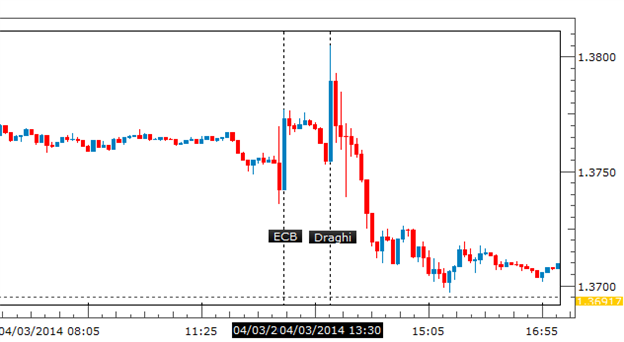 The ECB kept rates on hold once more in April and stated that the central bank was not excluding the use of unconventional tools if needed. Although the rate decision sent the Euro higher, when Draghi took the stage and said that the use of unconventional tools was a possibility, we saw Euro weakness across the board. Volatility was relatively weak as has been the case over the last few weeks. Market participants will note Draghi’s language in regards to the Euro as he has become more comfortable in using his position to talk down the Euro.