New Zealand Employment is expected to increase another 0.6% during the first-quarter, and a marked pickup in job growth may generate fresh 2014 highs in the NZD/USD as it puts increased pressure on the Reserve Bank of New Zealand (RBNZ) to normalize monetary policy further in the coming months.

RBNZ Governor Graeme Wheeler may continue to deliver a series of rate hikes in the second-half of the year as the stronger recovery raises the outlook for growth and inflation, and the bullish sentiment surrounding the NZD/USD may gather pace throughout 2014 as the Federal Reserve remains reluctant to move away from its highly accommodative policy stance.

The pickup in global trade paired with the ongoing expansion in business outputs may generate a meaningful jump in employment, and a positive development may continue to prompt higher highs in the NZD/USD as it heightens bets for another rate hike at the RBNZ’s June 11 meeting.

However, firms may scale back on hiring amid the slowdown in household consumption along with the decline in business sentiment, and a dismal employment print may lead to a near-term correction in the NZD/USD as it drags on interest rate expectations. 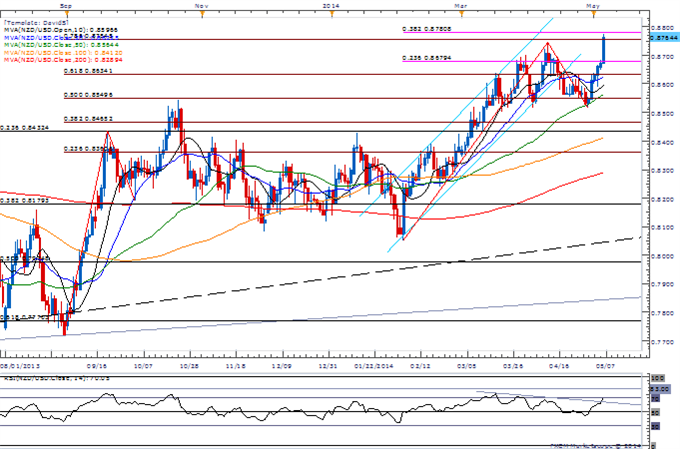 The New Zealand Dollar saw a slight uptick following employment data that came in better than expected, but follow through was incredibly limited. The pair remained essentially flat throughout the trading day. With rate expectations fully priced in and with the last inflation figure missing estimates to the downside, any negative data out of New Zealand could help keep our former high in place and so long that we see a relatively strong base in the Dow Jones FXCM USDollar Index.

Price & Time: Do or Die for the Euro