- RBA to Preserve Current Policy for the Seventh Consecutive Meeting

Despite expectations of seeing the Reserve Bank of Australia (RBA) retain its current policy in May, the policy statement accompanying the interest rate decision may undermine the bullish sentiment surrounding the AUD/USD should the central bank adopt a more dovish tone for monetary policy.

Indeed, Governor Glenn Stevens may take a more aggressive approach in weakening the Australian dollar as the persistent strength in the higher-yielding currency undermines the central bank’s upbeat assessment of the $1T economy, and the AUD/USD may face a more material decline over the next 24-hours of trading should the RBA show a greater willingness to further embark on its easing cycle.

The ongoing expansion in private sector lending paired with the pickup in job growth may push the RBA to normalize monetary policy sooner rather than later, and the bullish sentiment surrounding the AUD/USD may gather pace in May should the central bank retain an upbeat tone for the $1T economy.

However, the RBA may push for a weaker exchange rate as it undermines the outlook for growth and inflation, and Governor Glenn Stevens may look to further assist with the rebalancing of the real economy amid the persistent slack in private sector activity. 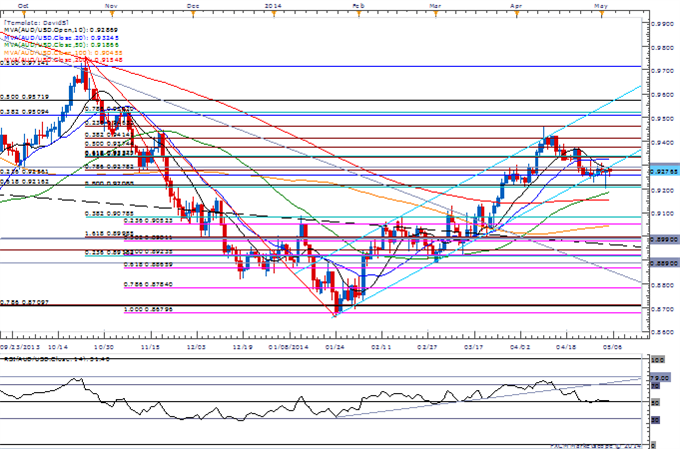 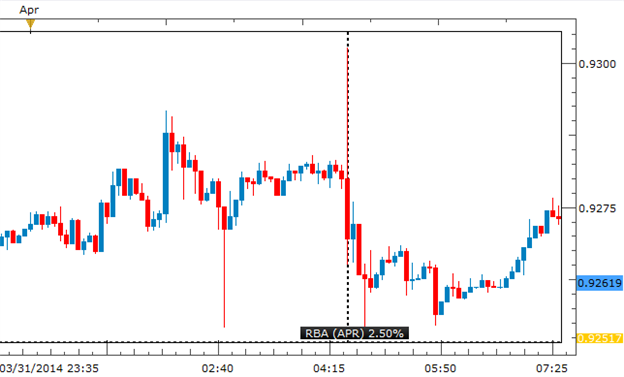 At the April RBA meeting we saw the central bank leave the key benchmark rate at 2.50% while reiterating that it sees a period of interest-rate stability. Despite a large fourth quarter CPI figure, inflation was said to remain in line with targets and that monetary policy was to remain accommodative. Few comments were given in regards to the FX rate, but the AUDUSD pair saw chop before ending lower on the day.

Forex Markets on the Verge of Volatility with Stocks, Bonds?