- Unemployment Rate to Narrow to 6.6%- Lowest Since January.

The U.S. Non-Farm Payrolls (NFP) report may spark a bullish reaction in the dollar (bearish EUR/USD) as the economy is expected to add another 215K jobs in in April, while the jobless is projected to narrow to 6.6% from 6.7% the month prior.

A pickup in job growth paired with a further decline in unemployment may put increased pressure on the Federal Open Market Committee (FOMC) to normalize monetary policy sooner rather than later, but the data may do little to alter the Fed’s policy outlook as Chair Janet Yellen remains reluctant to move away from the zero-interest rate policy (ZIRP).

The ongoing strength in private sector consumption paired with the uptick in business sentiment may prompt a sharp rise in job growth, and a better-than-expected print may generate a near-term pullback in the EUR/USD as it raises the fundamental outlook for the U.S. economy.

However, rising input prices paired with the persistent slack in the real economy may push businesses to scale back on hiring, and a dismal NFP print may heighten the bearish sentiment surrounding the reserve currency as it drags on interest rate expectations. 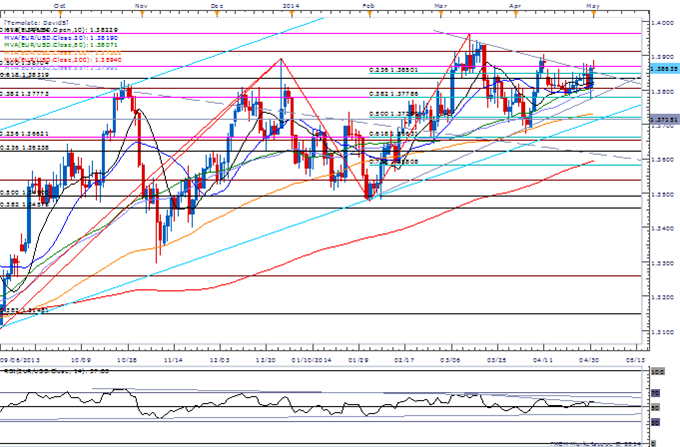 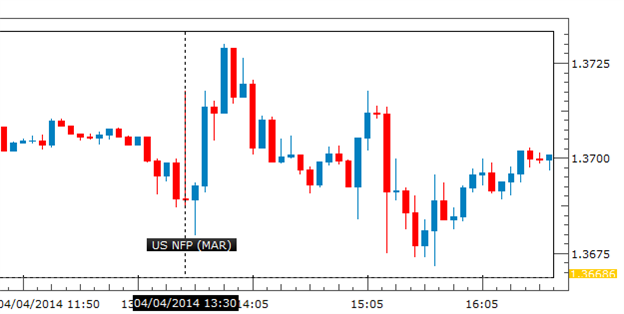 At the March Non-Farm Payrolls release we saw a print of 192K vs. 200K estimates and the figure, largely in line, caused little follow through in the EUR/USD pair. Following chop on both sides, we the week slightly higher. On Wednesday we saw ADP Employment Change figures for April come in slightly above estimates at 220K vs. 2010K expected. This will be the last major event risk for the week a key for monthly opening ranges.