- Federal Open Market Committee (FOMC) to Reduce QE by Another $10B.

- FOMC Meeting Minutes Due Out on May 21.

Another $10B reduction in the Federal Open Market Committee’s (FOMC) asset-purchase program may have a limited impact in propping up the greenback, and it seems as though we would need a material shift in the policy outlook to see a bullish U.S. dollar reaction as the central bank continues to highlight the ongoing slack in the real economy.

Indeed, the dollar may struggle to hold its ground should Fed Chair Janet Yellen continue to highlight a dovish tone for monetary policy, and the bearish sentiment surrounding the reserve currency may gather pace throughout the first-half of the year as the central bank remains reluctant to move away from its zero-interest rate policy.

A growing number of Fed officials may show a greater willingness to normalize monetary policy sooner rather than later amid sticky inflation paired with the resilience in private sector consumption, and the dollar may show a bullish reaction to the FOMC meeting should the central bank adopt a more hawkish tone for monetary policy.

However, the bar remains high to see a material shift in the policy outlook as the central bank continues to identify the persistent slack in the real economy, and the dollar may face additional headwinds over the near-term as the Fed talks down interest rate expectations.

To Cover the Market Reaction to the FOMC Meeting, Join DailyFX on Demand 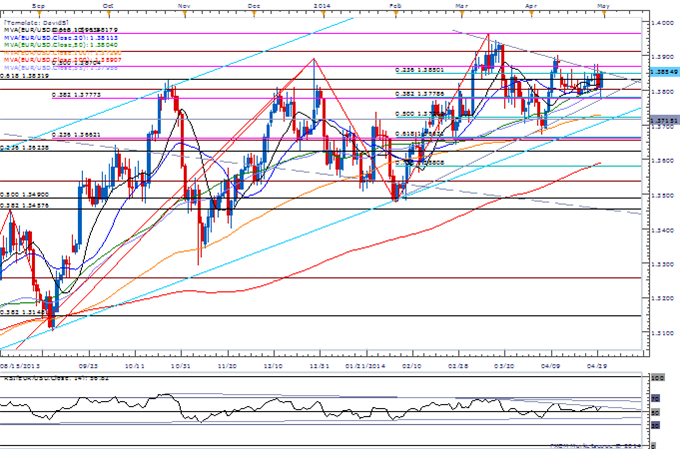 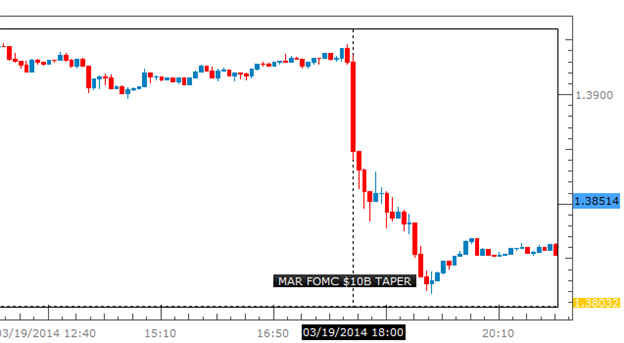 As expected, the Federal Reserve reduced its asset purchase program by $10B in March leaving the total monthly purchase total to $55B per month. As has been stated by one FOMC member after another, excluding any major financial disruption it is likely that we will continue to see a $10B taper per month with the QE3 program coming to an end by the end of the fourth 2014 quarter. Following the rate decision and release of updated forecasts we saw broad based USD strength with the EURUSD pair falling 100 pips within the hour.