According to a Bloomberg News survey, 54 of the 57 economists polled see the European Central Bank (ECB) sticking to the sidelines in April, but the market speculation (rate cut, negative deposit rates, verbal intervention, unsterilized bond purchases, Long-Term Refinancing Operation) surrounding the interest rate decision may spark increased volatility in the EUR/USD as market participants weigh the outlook for monetary policy.

The EUR/USD may push higher over the remainder of the week should the ECB merely reiterate the policy statement from the March 6 meeting, but the single currency may continue to give back the rally from earlier this year should central bank President Mario Draghi lay the groundwork to implement more non-standard measures across the monetary union.

Indeed, the heightening risk for deflation may put increased pressure on the ECB to further embark on its easing cycle, and the EUR may face a larger decline in the coming days should the central bank take additional steps to shore up the ailing economy.

However, President Mario Draghi may retain a rather neutral tone for monetary policy amid the positive developments coming out of the euro-area, and the EURUSD may continue to carve a series of higher highs & higher lows as the central bank remains reluctant to move away from its current policy. 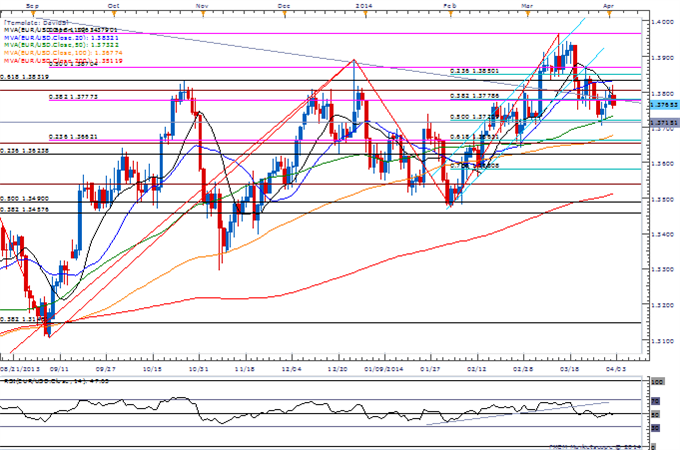 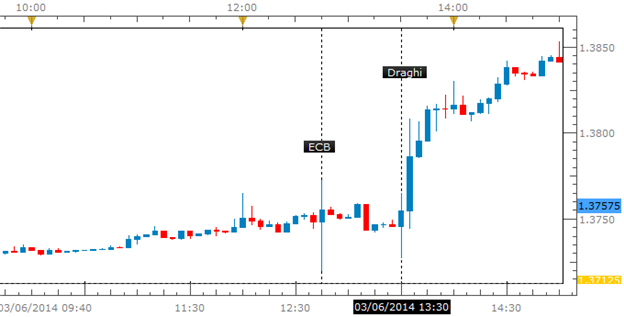 At last month’s European Central Bank Rate Decision and Draghi presser we saw the central bank release updated forecasts for 2015 and 2014 as well as new forecasts for a myriad of figures for 2016. Although a nod from German courts for OMT actions from the central bank had led some to believe some sort of action would be taken, the fact that this did not occur and the fact that Mr. Draghi remained upbeat sent the Euro to highs near the 1.40 mark over the following few days. As for insight into this meeting, recent inflation figures out of the EU have remained subdued and these challenges may push the central bank to take some sort of action whether it be verbal intervention to weaken the Euro or a move to lower the overnight rate by 10-15bps. Any actions of greater significance may be unlikely due to the complexities of any ‘QE’ style move from the central bank.