- RBA to Retain Current Policy for the Sixth Consecutive Meeting

The Reserve Bank of Australia (RBA) interest rate decision may generate a key topside break in the AUD/USD should the central bank adopts a more upbeat tone for the $1T economy.

Indeed, fresh comments from RBA Governor Glenn Stevens may push the AUDUSD above former support (0.9290) as the pair maintains the bullish trend from earlier this year, but we may see the central bank head toughen the verbal intervention on the higher-yielding currency in an effort to further assist with the rebalancing of the real economy.

The recent pickup in job growth along with the ongoing expansion in private sector consumption may prompt the RBA to move away from its easing cycle, and the AUDUSD may continue to retrace the decline from back in October should the central bank layout a more detailed exit strategy.

Nevertheless, the RBA may take a more aggressive approach in talking down the Australian dollar as Governor Stevens prefers the exchange rate closer to the 0.8500 handle, and a marked decline in the AUDUSD may highlight a lower high in the longer-term series should the pair fail to maintain the upward trending channel from earlier this year. 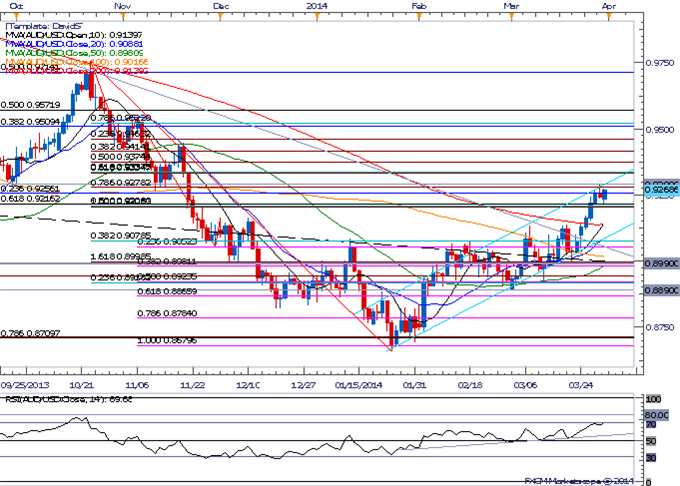 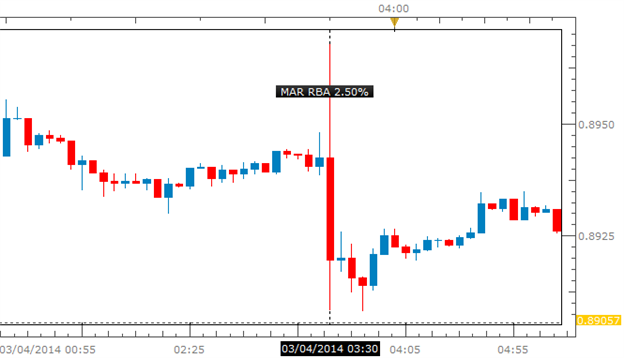 At last month’s Reserve Bank of Australia rate decision we saw the central bank keep rates unchanged and the Aussi saw a relatively tight, yet violent range at the release. The RBA reiterated comments that it sees a period of interest rate stability as well as consistent inflation targets over the next two years. The decline in the exchange rate of the Australian Dollar was noted as a factor that assisted in balanced growth and that EM conditions were more challenging than this time last year. For historical standards, it was noted that the FX rate was still high. In comments last week, RBA’s Stevens seemed to parse his words when asked about the current Aussi rate. It is likely that recent inflation data above 2.5% has sparked recent RBA silence and a rate cut would be highly unexpected in that context.