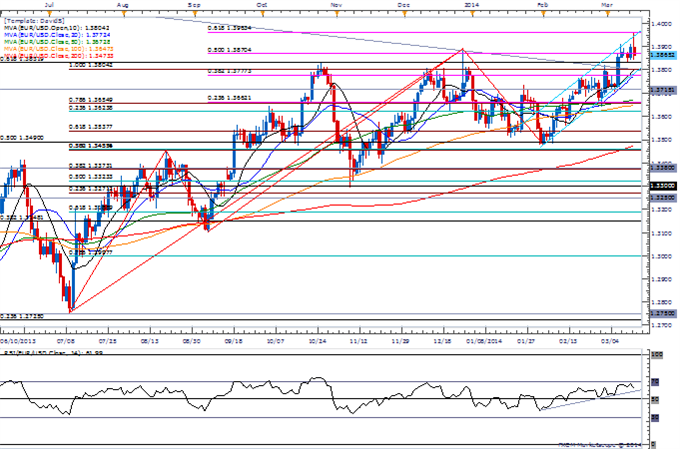 - U. of Michigan Confidence to Improve for Second Consecutive Month

A further pickup in the U. of Michigan Confidence survey may prop up the U.S. dollar ahead of the Fed’s March 19 meeting as it raises the prospects for a stronger recovery in 2014.

Indeed, positive developments coming out of the U.S. economy may heighten bets of seeing another $10B reduction in the asset-purchase program, but an unexpected decline in household sentiment may drag on interest rate expectations as Fed Chair Janet Yellen pledges to retain the zero-interest rate policy even after achieving the 6.5% threshold for unemployment.

The rebound in retail sales along with the pickup in wage growth may highlight a further improvement in household sentiment, and an upbeat print may pave the way for a more meaningful rebound in the greenback as it raises the Fed’s scope to normalize monetary policy sooner rather than later.

However, U.S. consumer confidence may unexpectedly deteriorate amid higher living costs paired with the recent slowdown in private sector credit, and a weaker-than-expected survey may prompt another selloff in the dollar as it gives the Fed greater scope to retain its highly accommodative policy stance for an extended period of time.

Join DailyFX on Demand for Full Coverage of the U. of Michigan Confidence Survey

Impact that the U. of Michigan Confidence has had on EUR/USD during the last release

February 2014 U. of Michigan Confidence Survey 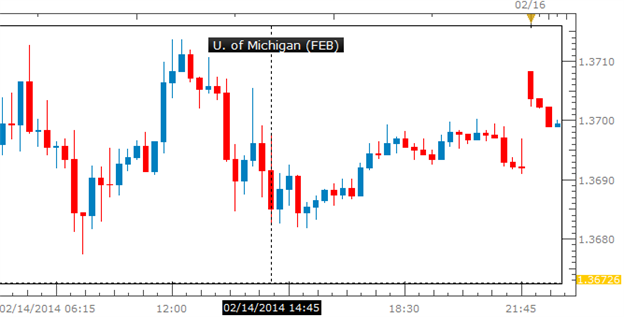 The University of Michigan confidence survey for February came in better than expected and the revision later in the month edged up higher to 81.6. Despite the beat, price action in EUR/USD was limited and is likely to remain limited at the release so long that the figure does not largely deviate from expectations. Market sentiment remains preoccupied with much larger developments in the equity market in addition to geopolitical tensions and the week ahead comes with some key event risk including European CPI figures and the FOMC Rate Decision.