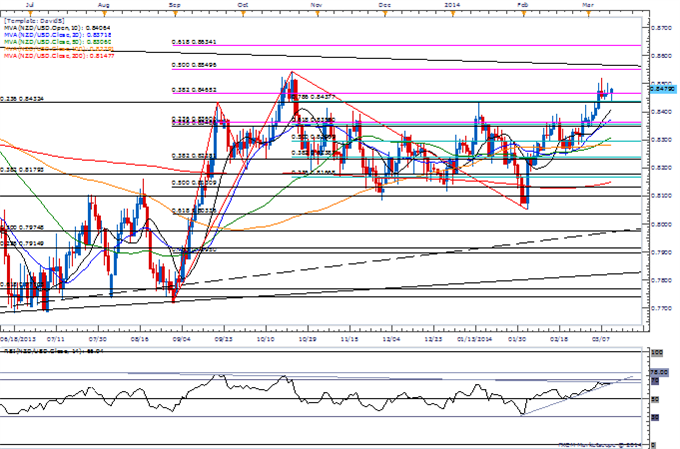 NZD/USD to Breakout Should RBNZ Favor Series of Rate Hikes

- Markets Pricing 98% Chance for 25bp Rate Hike According to OIS

According to a Bloomberg News survey, all of the 15 economists polled see the Reserve Bank of New Zealand (RBNZ) raising the benchmark interest rate by 25bp in March, and the central bank may look to normalize monetary policy throughout 2014 as the pickup in economic activity raises the outlook for growth and inflation.

Indeed, RBNZ Governor Graeme Wheeler may sound a more hawkish this time around amid the ongoing threat of an asset-bubble, and interest rate decision may spur fresh highs in the New Zealand dollar should the central bank show a greater willingness to implement a series of rate hike over the coming months.

With that said, the RBNZ may lay out a more detailed exit strategy in light of the pickup in global trade along with the ongoing improvement in the labor market, and a material shift in the policy outlook should prop-up the higher-yielding currency as the central bank moves away from its easing cycle.

Nevertheless, the RBNZ may stick to its current policy amid the threats surrounding the Emerging Market (EM) economies, and the kiwi may give back the advance carried over from the previous month should the central bank defy market expectations and keep borrowing costs on hold. 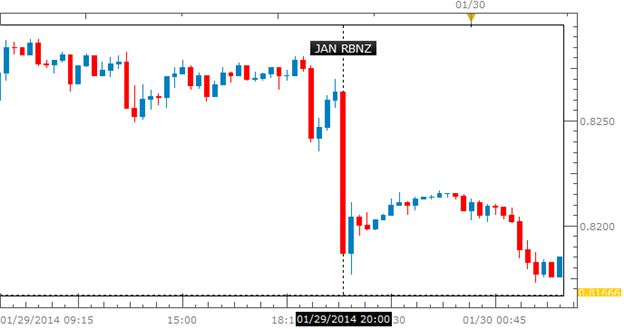 As the RBNZ left rates at 2.50% at the January meeting amid speculation of a hike, the NZD/USD pair fell 52 pips to the downside within the hour and went on to suffer losses below the 81 level in the following days. Since then we have seen a resumption of the uptrend and nearing the rate decision markets are pricing in a 25bps hike. It is important to note that just because rate hikes traditionally can trigger strength in a currency, the fact that markets have largely priced in these developments may adversely impact the NZD/USD if we only see a 25bps hike.