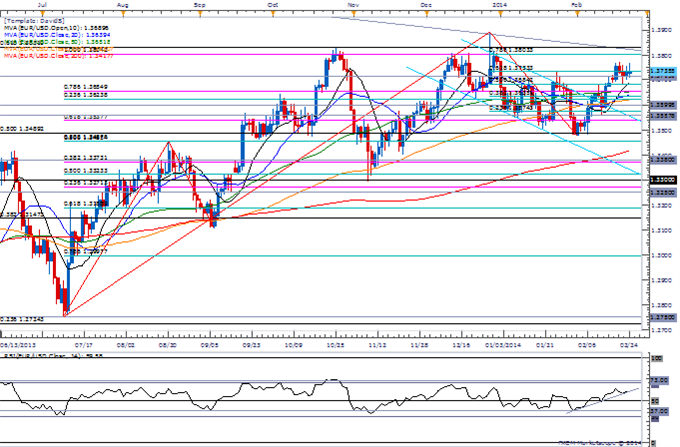 The Conference Board’s Consumer Confidence survey is expected to narrow to 80.0 in February and a marked decline in household sentiment may trigger a bearish reaction in the U.S. dollar as it dampens the outlook for growth and inflation.

With the Federal Open Market Committee (FOMC) poised to discuss another $10B taper at the March 19 meeting, a dismal confidence reading may have a greater impact on the interest rate outlook, and the greenback may face additional headwinds over the near to medium-term as the central bank retains the dovish twist to its forward-guidance.

The ongoing slack in the labor market paired with the slowdown in private consumption may highlight a further decline in household sentiment, and a dismal print may generate a further decline in the greenback as it dampens the prospects for a stronger recovery in 2014.

However, the uptick in wage growth along with the expansion in consumer credit may prop up household confidence, and a better-than-expected release may spur a more meaningful rebound in the USD as it raises the Fed’ s scope to normalize monetary policy sooner rather than later.

Join DailyFX on Demand for Full Coverage of the U.S. Consumer Confidence Report

Impact that the U.S. Consumer Confidence survey has had on EUR/USD during the last release 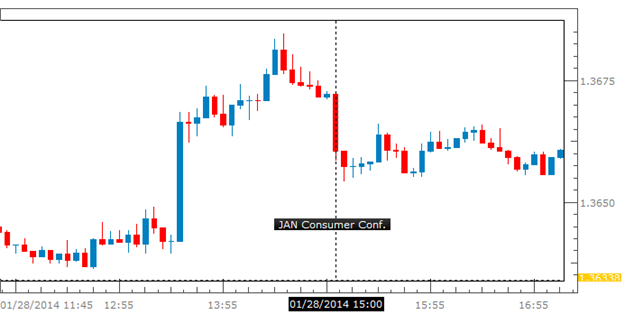 Consumer Confidence out of the U.S. had a small impact on EUR/USD price action following the print, but the better than expected reading came out in the Dollar’s favor. This February’s reading may provide more volatility as market participants assess whether recent weather has been the driver of negative data over the past few weeks. If we do see consumer confidence follow the rest of U.S. data to the downside, then we can expect Dollar weakness against the majors.