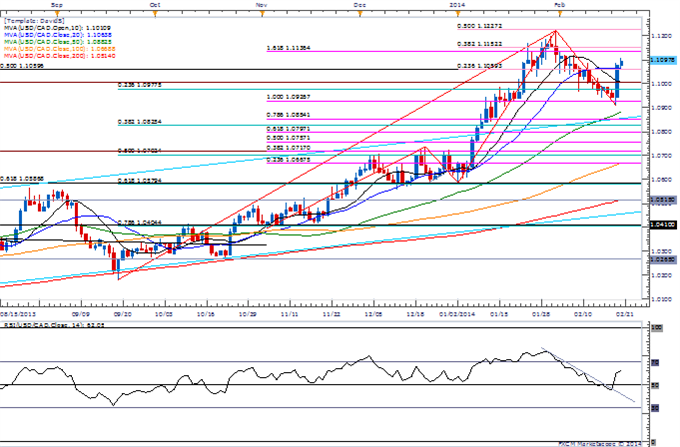 - Headline Inflation of 1.3% Would Match the Highest Reading Seen in 2013

A pick up in Canada Consumer Prices may spur a more meaningful correction in the USDCAD as it limits the threat of seeing the Bank of Canada (BoC) implement a rate cut in 2014.

Despite the recent slowdown in economic activity, Governor Stephen Poloz may retain a rather balanced tone for monetary policy should we see a diminishing risk for disinflation, and the BoC may keep the benchmark interest rate on hold this year as central bank officials see a more robust recovery in the U.S. – Canada’s largest trading partner.

Rising input costs along with the uptick in wage growth may spark a further rise in consumer prices, and a higher-than-expected inflation print may spur a more meaningful correction in the USDCAD as it limits the BoC’s scope to implement a rate cut in 2014.

However, firms may continue to conduct heavy discounting amid the slowdown in consumption paired with the persistent slack in the real economy, and a dismal CPI print may spur fresh highs in the USDCAD as the BoC shows a greater willingness to revert back to its easing cycle.

As was the case during the November print, CPI data out of Canada for the month of December disappointed by a tenth of a percent. Unlike last month where USD/CAD spiked to fresh multi-year highs, price action was missed and the pair ended the day almost flat. It is no surprise that price action slowed after such a large move post-breakout, especially as market participants scaled back positions before the weekly close and FOMC Rate Decision that following Wednesday. As for this print, price action in USD/CAD to the upside over the past 24 hours combined with important time cycles strongly supports a continuation higher if we see weaker than expected CPI figures. On the other hand, a meet or beat of the inflation data could provide for an opportunistic setup to fade Friday lows.