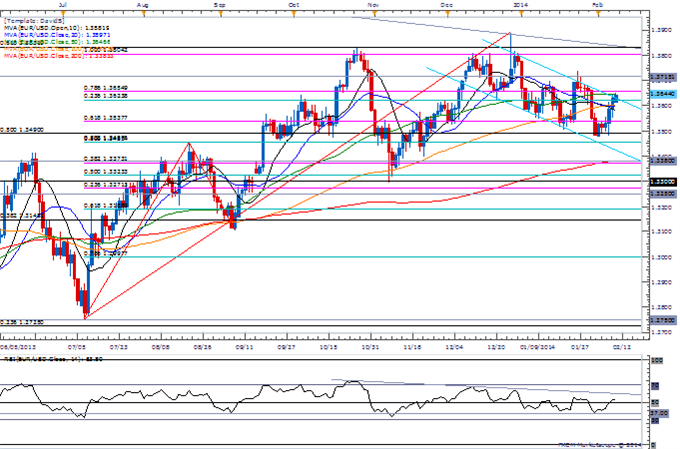 - Will Also Speak to Senate Banking Committee on Thursday, February 13, 2014

The Humphrey-Hawkins Testimony with Fed Chair Janet Yellen may heavily influence USD price action in the days ahead as market participants weigh the outlook for monetary policy.

Indeed, there’s a risk that the Fed will implement a more dovish twist to its forward-guidanceas the unemployment rate quickly approaches the 6.5% threshold, but we may see a growing number of central bank officials favor another $10B taper at the March 19 meeting amid the prospects for a stronger recovery in 2014.

The Fed may stay on course to normalize monetary policy as the pickup in growth dampens the threat for disinflation, and the bullish sentiment surrounding the greenback may gather pace throughout 2014 should the central bank show a greater willingness to halt Quantitative Easing (QE) later this year.

However, the slowdown in job growth along with the recent lull in business outputs may dampen bets for a stronger recovery, and the dollar may face additional headwinds over the near-term should the Fed opt for a smaller series of reductions to the asset-purchase program. 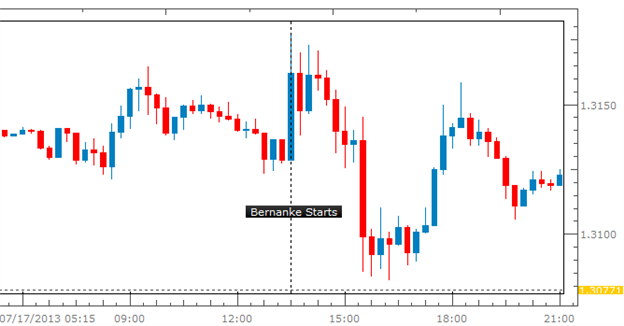 At the last Humphrey-Hawkins Testimony we saw initial Euro strength, but by Bernanke’s Q&A we saw the greenback gain some strength. Chairman Bernanke reiterated in his testimony that the FOMC was set to taper asset purchases by the end of the year if incoming data remained strong. Now that markets have gone through two $10B reductions in asset purchases in December and January, traders will be looking to remarks from Dr. Janet Yellen for further insight on recent developments in global markets. The new chairwoman will have the chance to clarify her forward guidance as she begins her four year term, although changes in that forward guidance are not expected. A dovish twist could support the market on the a short-term basis, but underlying risks of Fed’s actions remain.