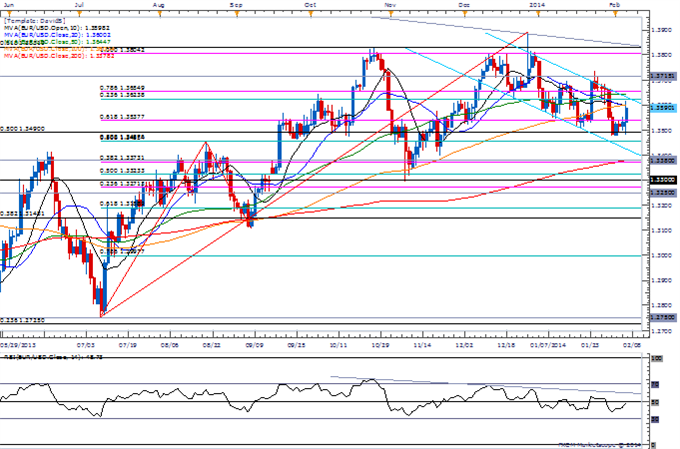 The U.S. economy is expected to add another 180K jobs in January, but another dismal print may undermine the bullish sentiment surrounding the dollar, especially if we don’t see a large upward revision to the 74K December reading.

Nevertheless, a positive employment report may encourage the Federal Reserve to reduce the asset-purchase program by another $10B at the March 19 meeting, and the central bank may look to normalize monetary policy sooner rather than later as Fed officials see a stronger recovery in 2014.

Firms in the U.S. may ramp up on hiring amid the resilience in private sector consumption, and an upbeat NFP print may trigger a near-term rally in the dollar as it raises the scope of seeing the Fed raise the benchmark interest rate ahead of schedule.

However, the recent batch of data certainly does not bode well for the labor market amid the uptick in planned job cuts along with the slowdown in business outputs, and another dismal release may trigger a further decline in the USD as it dampens the outlook for growth and inflation.

Despite strong ADP Employment Figures ahead of the NFP release last month, US Non-Farm Payrolls for December came in much weaker than market expectations and pushed the USDollar lower across the board. Surveys called for a net positive 196K reading, but figures indicated a weak 74K change. It is worth noting that further potential downside was at least limited by a strong upward revision from 203K to 241K for the November period. Market participants will surely be looking for another upward revision here in addition to a strong print to support the greenback. As for insight into this print, the ADP Employment Figures on Wednesday came in slightly below expectations, but the ISM Non-Manf. Employment component saw a month over month increase. With US yields, USD/JPY and the S&P 500 all at critical levels, a disappointing print could prove disastrous for the greenback moving into the end of the trading week. The lack of a strong upward revision for the December figure will also likely be viewed poorly by market participants.