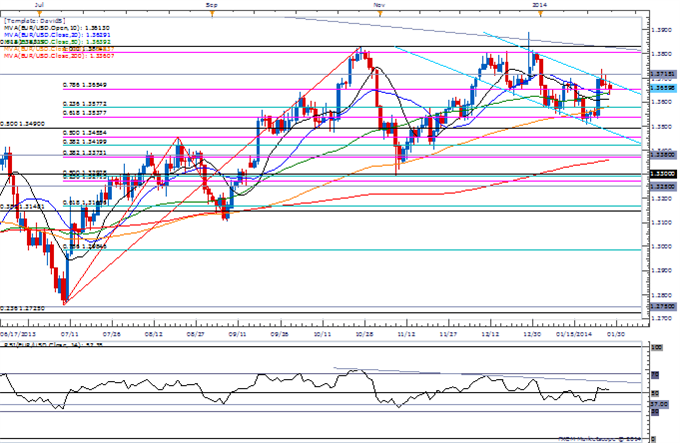 - Federal Open Market Committee (FOMC) to Taper Another $10B

The Federal Open Market Committee (FOMC) is widely expected to reduce its asset-purchase by another $10B as the benefits of quantitative easing now outweighs the costs, and the policy outlook may prop up the dollar in February as the central bank moves away from its easing cycle.

However, we may see a growing number of Fed officials favor a less-aggressive approach in normalizing monetary policy amid the spillover-effects to the global economy, and a material shift in central bank rhetoric may undermine the bullish sentiment surrounding the dollar if the FOMC implements a dovish twist to its forward-guidance.

The Fed may adopt a more neutral tone for monetary policy as the central bank anticipates a stronger recovery in 2014, and we may see a bullish reaction in the dollar should the committee lay out a more detailed exit strategy.

Nevertheless, the FOMC may implement a wait-and-see approach amid the uncertainties surrounding the world economy, and the greenback may face a further decline over the near-term if the central bank shows a greater willingness to retain its highly accommodative policy stance for an extended period of time.

For Full Coverage of the FOMC Meeting, Join DailyFX on Demand

BullishUSD Trade: FOMC Delivers Another $10B Taper & Pledges to Stay on Course 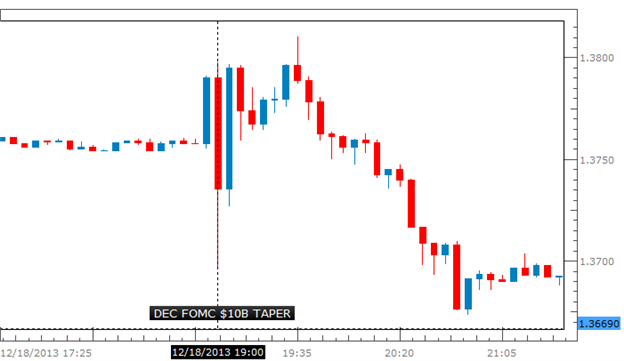 Despite many market participants calling for the first taper of the Fed’s asset purchase program in March, the FOMC came out with a $10B taper split evenly between Treasury and MBS purchases. The surprise sent USD pairs whipsawing to the up and downside before finally ending in USD strength against the majors. Moving into Wednesday’s January FOMC meeting, it is important to note that the USDollar index is just slightly below where we were at the daily close of the last FOMC day. This is a critical juncture for global markets with emerging market currencies selling off with equities over the past week. If we are to see another $10B taper as expected, extreme volatility and USD strength cannot be ruled out. If the recent selloff and last NFP report force the Fed’s hand and lead the FOMC to delay a January/February taper, the greenback will certainly falter on the back of a dovish Fed decision. Note: there is no February meeting and this will be the last rate decision out of the Fed until March 19th.