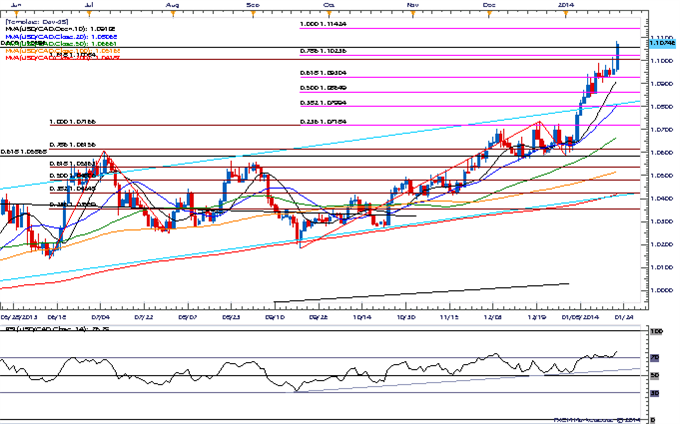 In light of the recent comments from the BoC, it seems as though Governor Stephen Poloz may revert back to an easing cycle as the persistent slack in the real economy raises the threat for disinflation, and the central bank may turn increasingly dovish over the coming months should we see a further slowdown in the economic recovery..

Easing price pressures paired with the underlying recovery in the real economy may generate a rebound in retail sales, and a positive print should offer a more meaningful pullback in the USDCAD as it remains overbought.

However, subdued wage growth paired with the ongoing weakness in the labor market may continue to drag on consumption, and a weaker-than-expected outcome may spur fresh lows in the Canadian dollar as it fuels expectations for a rate cut.. 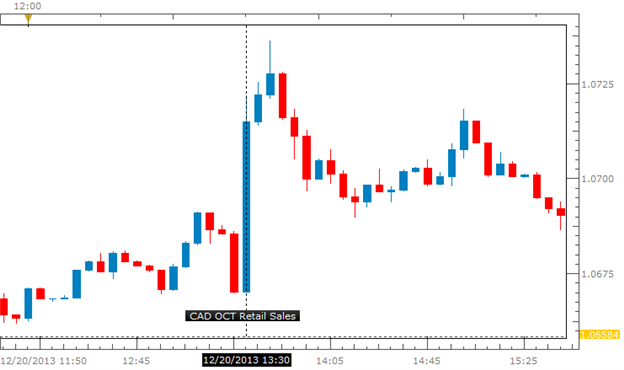 Retails Sales for the month of October came three tenths below expectations to actually decline MoM by 0.1% following September’s dismal reading that marked the biggest decline since April 2010. The initial move in USDCAD higher was partially inflated by CPI data that also came in below economists’ surveys at 13:30GMT. Notably, the missed MoM figure for Retail Sales was led by a 1.9% decline in motor vehicle & parts dealers in October. Following the Bank of Canada rate decision yesterday, USDCAD saw multi-year highs intraday and spent the NY session above 1.10. Certainly, a missed print here would contribute to already dismal data out of Canada and may continue to put pressure on CAD crosses as important levels continue to be breached following a breakout against the greenback earlier this month.