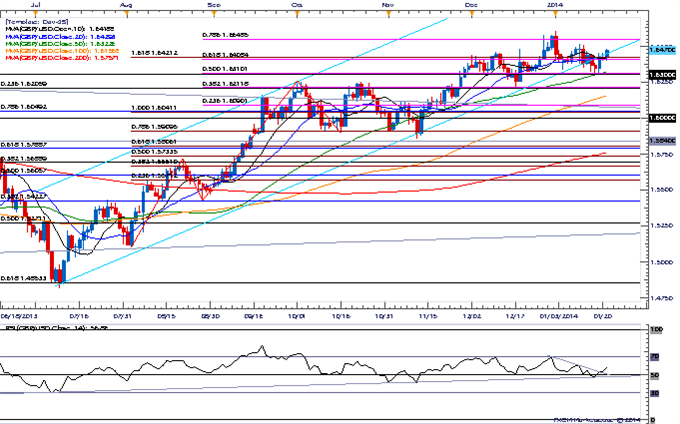 U.K. jobless claims are projected to fall another 32.0K in December and the ongoing improvement in the labor market may trigger fresh highs in the GBPUSD as it raises the outlook for growth and inflation.

Indeed, the stronger recovery in the U.K. raises the scope of seeing the Bank of England’s (BoE) 7% unemployment threshold being breached later this year, and the central bank may implement a dovish twist for its forward-guidance on monetary policy as the real economy remains far from full-capacity.

The resilience in private sector consumption paired with the pickup in building activity may continue to generate a positive development, and a marked decline in unemployment claims may spur a higher high in the GBPUSD as it maintains the bullish trend dating back to July.

However, the recent slowdown in business outputs paired with the ongoing slack in the real economy may drag on job growth, and a dismal print may spark a more meaningful correction in the British Pound as market participants scale back bets for a BoE rate hike. 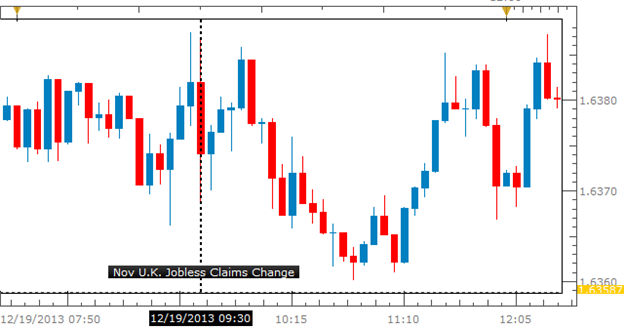 Jobless Claims figures came in slightly better than expected while prior figures were revised lower from -41.7K to -42.8K thus contributing to another batch of strong data for the United Kingdom. The ILO Unemployment rate saw a drop to 7.4% vs. 7.6% prior and the Pound saw some initial chop at the release before closing relatively unchanged on the day. Since then, the GBP/USD pair has (for the most part) remained trading between 1.63 and 1.65 as further catalysts to help further Pound strength have remained on the sidelines. After a strong Retail Sales reading for December, a beat of Jobless Claims here could help further support the Pound despite a weak CPI print for last month. Note that there is additional event risk at the same time with Bank of England Minutes being released as well.