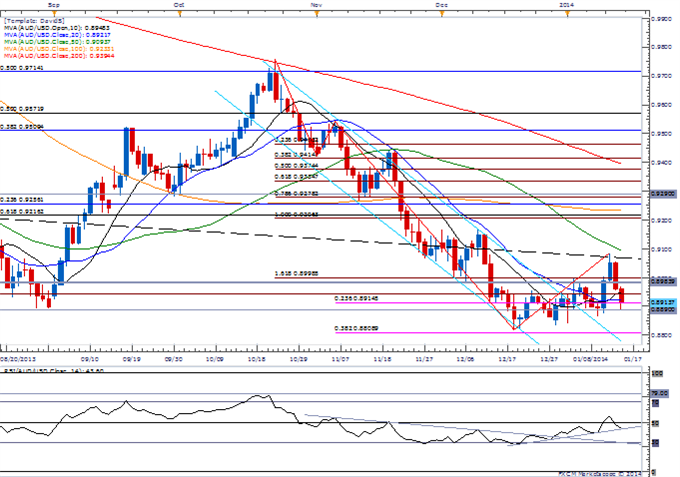 - Australia Employment to Increase for Second Month; Jobless Rate to Hold at 5.8%

The AUDUSD may face a larger correction over the near-term as the Australian economy is expected to add another 10.0K jobs in December.

Indeed, a further pickup in job growth may present the Reserve Bank of Australia (RBA) with a greater argument to move away from its easing cycle, and the AUDUSD may face a larger rebound should Governor Glenn Stevens talk down bets for another rate cut.

The ongoing expansion in private sector consumption may prompt firms to further expand their labor force, and a larger-than-expected rise in employment may encourage the RBA to soften its dovish rhetoric for monetary policy as growth prospects improve.

However, the persistent slack in business outputs may drag on hiring, and a dismal jobs print may heighten bets for additional monetary support as the region continues to face an uneven recovery.

Employment increased 21.0K in November following an unexpected 0.7% drop the month, while the jobless rate climbed to an annualized 5.8% from 5.7% as discouraged workers returned to the labor force. The market reaction was short-lived as the AUDUSD quickly pulled back from 0.9080, and the higher-yielding currency continued to lose ground throughout the day as the pair closed at 0.8935.