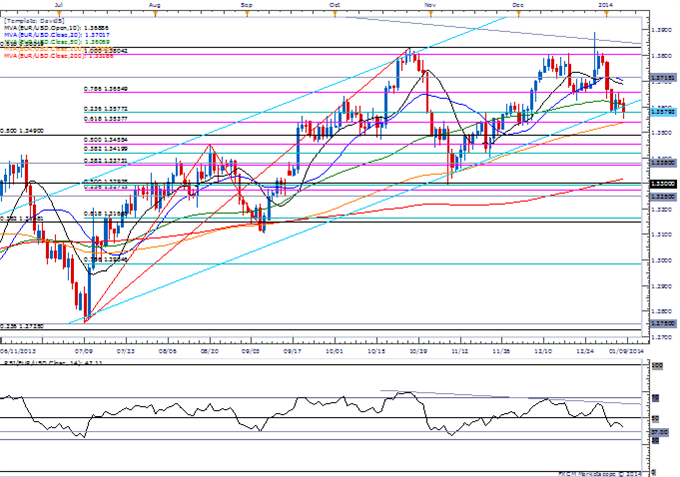 The European Central Bank (ECB) may help to prop up the single currency as the Governing Council is widely expected to keep the benchmark interest rate on hold while preserving its forward-guidance for monetary policy.

A further delay in the ECB’s easing cycle may instill a bullish outlook for the EURUSD as President Mario Draghi retains a wait-and-see approach, but the single currency may struggle to hold its ground should the central bank head highlight a greater risk for disinflation.

The ECB may show a greater willingness to implement more non-standard measures over the near-term amid the ongoing weakness in the labor market paired with the growing threat for disinflation, and a more-dovish policy statement may drag on the single currency as President Mario Draghi retains a cautious outlook for the region.

However, the ECB may adopt a more neutral tone this time around as the central bank anticipates a more meaningful recovery in 2014, and the Euro may trade on a firmer footing should the Governing Council talk down bets for additional monetary support.

Join DailyFX on Demand for Full Coverage of the ECB Meeting 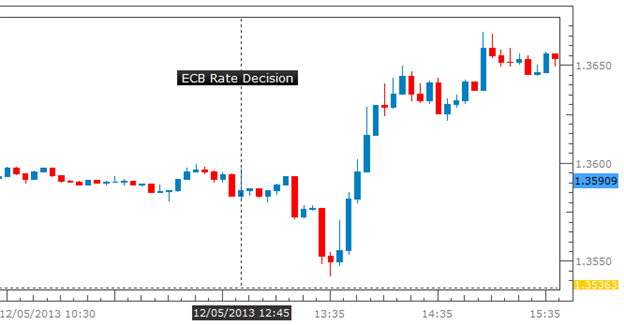 Following a 25bps cut of the ECB’s key benchmark interest rate in November, the central bank left rates unchanged at 0.25% in November. Price action in EUR/USD was almost unchanged following the announcement as traders awaited key US GDP data for the third quarter at 13:30GMT that day. The December announcement was key to the Euro moving forward in that Mr. Draghi presented new ECB inflation and GDP forecasts for 2014 and 2015. Although the central bank president upped GDP estimated by a tenth of a percent to 1.1% for this year, inflation forecasts were lowered from 1.3% to 1.1% for 2014. The European Central Bank continues to face the threat of disinflation moving into the new year and non-standard measures may have to be enacted in the coming months as the Federal Reserve steps back from its asset purchase program, QE3. As the ECB’s only mandate is price stability, market participants cannot underestimate the measures that the central bank may have to enact in order to protect healthy inflation rates. European Central Bank members have openly stated that negative deposit facility rates and further benchmark interest rate cuts remain on the table.