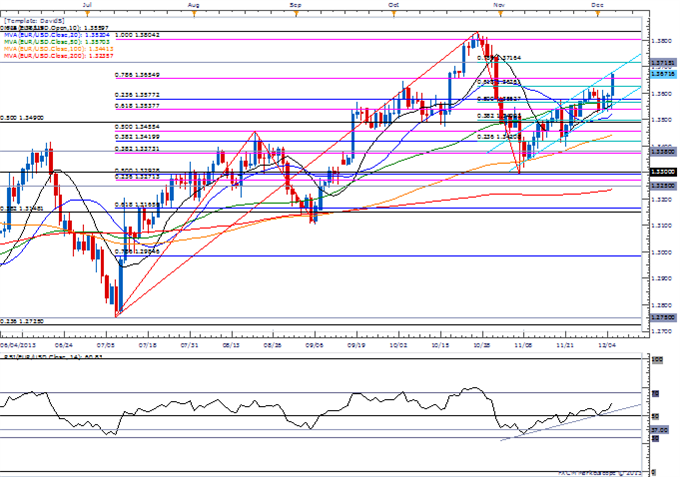 The U.S. economy is expected to add another 185K jobs in November and a positive development may highlight a bullish outlook for the dollar as it raises the Fed’s scope to taper the asset-purchase program at the December 17-18 meeting.

A further improvement in the U.S. labor market may spark a more material shift in the policy outlook as the Fed retains its forward-guidance for monetary policy, and we may see a growing number of central bank officials show a greater willingness to move away from the easing cycle.

The resilience in private sector consumption along with the pickup in growth may foster a larger-than-expected rise in NFP, and a positive development may fuel bets for a December taper as Fed officials refrain from undermining the timeline laid out by Chairman Ben Bernanke.

However, NFPs may disappoint should the slowdown in business outputs drag on hiring, and a dismal employment report may spark a sharp selloff in the USD as it raises the risk of seeing the FOMC carry its highly accommodative policy stance into 2014.

Last month’s NFP print covered the U.S. government shutdown in October and pushed economists to give a dismal 119K estimate. The 204K print ended up coming in at the highest since February and the second highest of 2013. The better than expected reading slammed EUR/USD lower and- after some chop- ended down only 49 pips after an hour. Data out of the U.S. (including employment components in ISM surveys and the ADP Employment Change) has been favorable over the past week, but those expecting a beat must take note of the revised estimate up to 185K. If we do see a beat, expect speculation of a December Fed taper to resume after one incredible week in U.S. data.