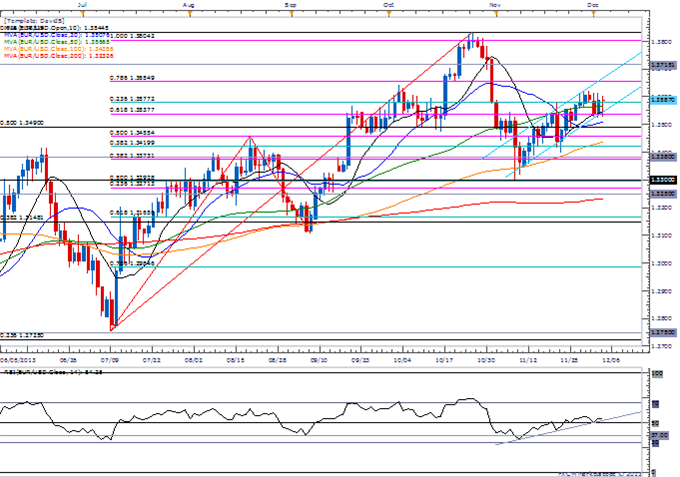 - President Mario Draghi to Sounds More Dovish; Which Non-Standard Measure is Next?

The European Central Bank (ECB) is widely expected to adopt a more dovish tone for monetary policy as the Governing Council remains poised to implement more non-standard measures in 2014.

Given the recent headlines surrounding the ECB, there may be little in terms of new surprises as the Governing Council looks at a range of policy tools (Negative Deposit Rates, Long-Term Refinancing Operations, and Quantitative Easing), but the Euro may struggle to hold its ground following the policy meeting should President Mario Draghi layout a more detailed schedule for its easing cycle.

The ECB may lay out a more detailed timeline for its easing cycle as the underlying weakness in the real economy heightens the threat for deflation, and a material shift in the policy outlook may spark a key reversal in the EURUSD as the pair appears to be carving a head-and-shoulders top.

However, the ECB may not sound so dovish this time around amid the small uptick in price growth, and the Euro may continue to track higher over the near-term as it retains the bullish trend carried over from November.

Join DailyFX on Demand for Full Coverage of the ECB Meeting 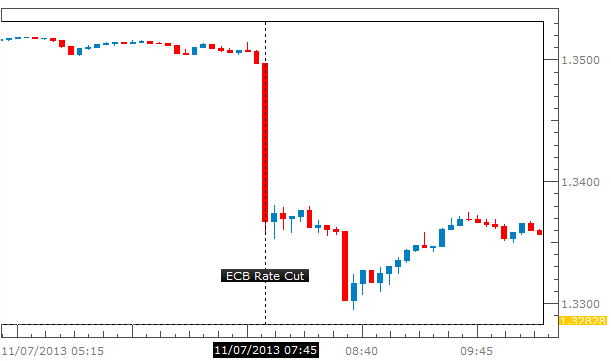 In a surprise move, the European Central Bank cut its key benchmark interest rate last month by 25bps from 0.50% to 0.25%. The announcement was slightly delayed and this led to immediate selling of Euro crosses. When the release finally hit the wires, the Euro continued to come under pressure and was down almost 200 pips against the greenback a little under an hour after the announcement. ECB President Mario Draghi did his best to talk down the Euro further by making it clear that the central bank would consider negative deposit facility rates in an attempt to spur lending by Eurozone banks. After this rate cut, it looks increasingly more likely that such action would not be taken unless CPI prints start to echo signs of coming deflation.