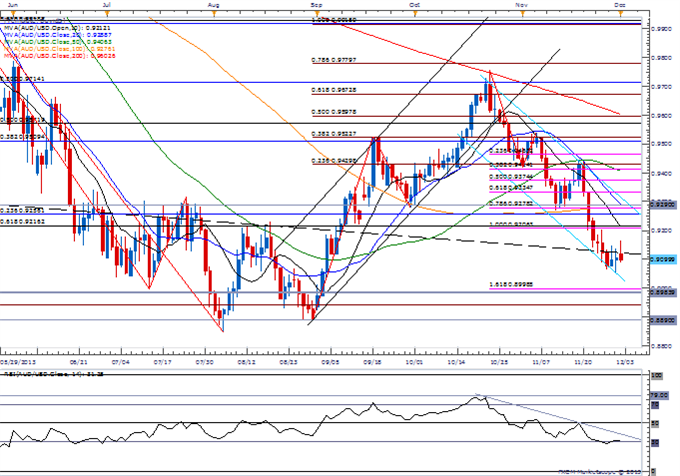 The Australian dollar may continue to give back the rebound from back in August (0.8846) should the Reserve Bank of Australia show a greater willingness to further embark on its easing cycle.

Despite the threats of a currency intervention, the RBA may talk up bets for further rate cuts as the government delays the A$ 8.8B injection for the central bank, and we may see Governor Glenn Stevens adopt a more dovish tone for monetary policy in order to further assist with the rebalancing of the real economy.

Despite the ongoing weakness in the real economy, the RBA may continue to highlight the threat of an asset-bubble to retain its current policy, and we may see a more meaningful rebound in the AUDUSD should Governor Stevens strike a more neutral tone for monetary policy.

Nevertheless, the slowdown in inflation expectations along with the ongoing weakness in the labor market may undermine the RBA’s scope to retain its current policy stance, and the Australian dollar remains at risk of facing additional headwinds in 2014 as the government struggles to achieve its budget target. 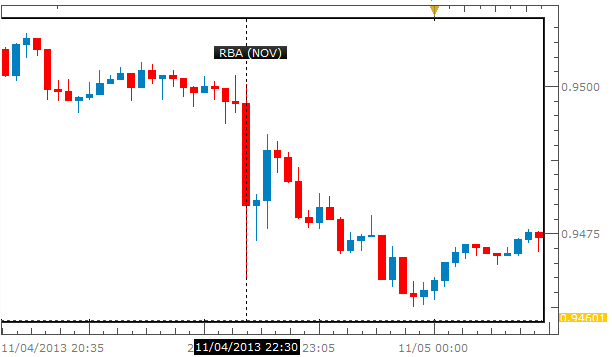 The brief RBA policy statement last month once again mentioned the impact of a higher Australian Dollar on balanced growth while saying that inflation is currently consistent with their medium-term targets. With AUD/USD down almost 4% since the last rate decision, market participants will be looking for statements regarding the Aussi as it continues to press new monthly lows amidst a lack of support for commodity bloc currencies. Mr. Stevens may attempt to use the central bank statement to weaken the Aussi further if he feels the momentum must continue to the downside. Remember, Australian GDP will follow the RBA at 00:30GMT on Wednesday.