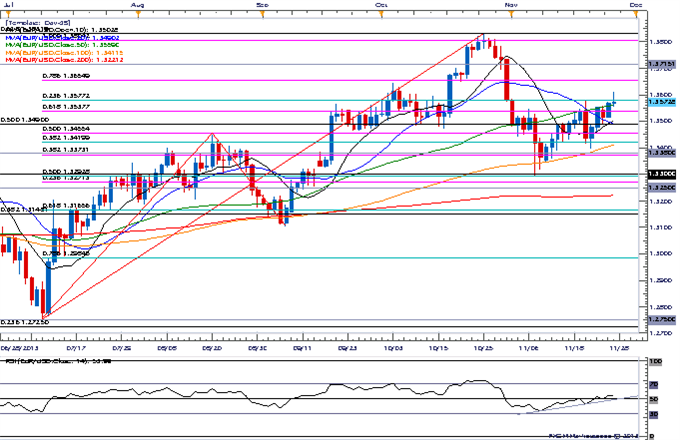 - German Unemployment to Hold Flat After Rising for Last Three-Months

Germany’s Unemployment Report may threaten the short-term rebound in the EURUSD should the figure highlight a more subdued recovery in Europe’s largest economy.

With the European Central Bank’s (ECB) December 5 meeting quickly approaching, a further deterioration in the growth outlook may put increased pressure on the Governing Council to take more unprecedented steps, and the policy outlook may become a growing proponent to drive the Euro lower as President Mario Draghi looks to negative deposit rates.

The slowdown in private sector consumption may continue to drag on the labor market as it prompts firms to scale back on hiring, and another unexpected uptick in German Unemployment may help to carve a head-and-shoulders top in the EURUSD as it heightens the threat for deflation.

Nevertheless, the rise in business sentiment a long with the pickup in global trade may highlight a turning point for Germany’s labor market, and a positive development, may encourage a more bullish outlook for the single currency as it gives the ECB greater scope to retain its wait-and-see approach. 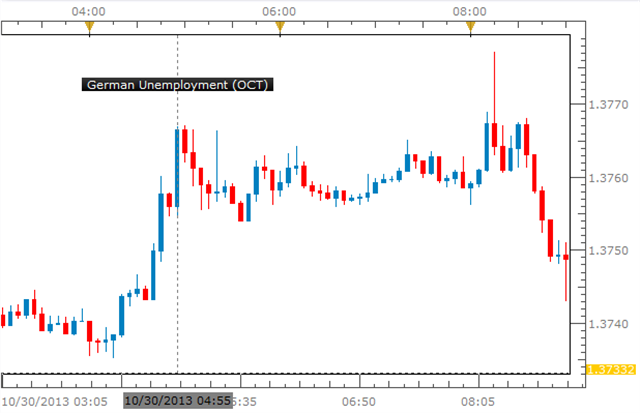 Although the October print missed flat estimates coming in at 2K, the jobless rate remained steady at 6.9% and the prior reading was revised lower by 1K. The release was good for 10 pips to the upside for EUR/USD, but momentum waned ahead of Euro Zone Consumer Confidence and US CPI prints later that day. Economists surveyed by Bloomberg had previously been predicting a 6.8% unemployment rate by 4Q 2013, but November’s survey release shows economists have revised their outlook to a year end 6.9% unemployment rate for Germany.