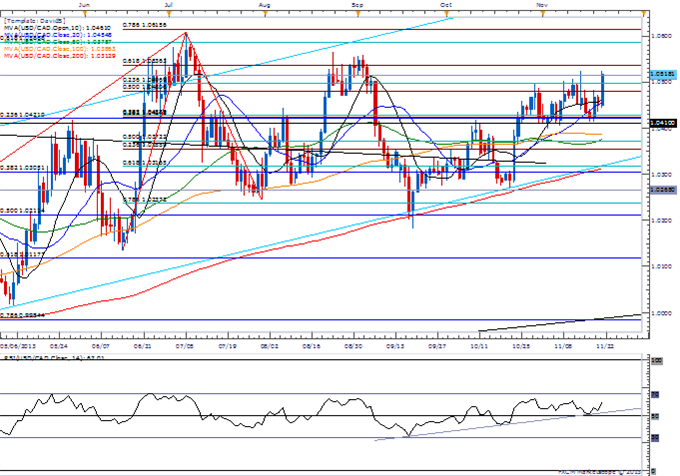 - Canada Consumer Price Index to Slip Below 1.0% for First Time Since May

A further slowdown in Canada’s Consumer Price Index may highlight a bearish outlook for the Canadian dollar as it heightens the threat for deflation.

It seems as though BoC Governor Stephen Poloz no longer sees a need for higher interest rates in light of the slowing recovery, and the central bank may adopt a more dovish tone for monetary policy as growth and inflation remains subdued.

Firms in Canada may embark on heavy discounting amid the slowdown in private sector consumption, and a marked slowdown in price growth may prompt the BoC to reinstate its easing cycle in order to encourage a stronger recovery.

Nevertheless, the pickup in job growth paired with the rise in business confidence may help to limit the downside for price growth, and a positive development may produce a meaningful correction in the USDCAD as market participants scale back bets for additional monetary support. 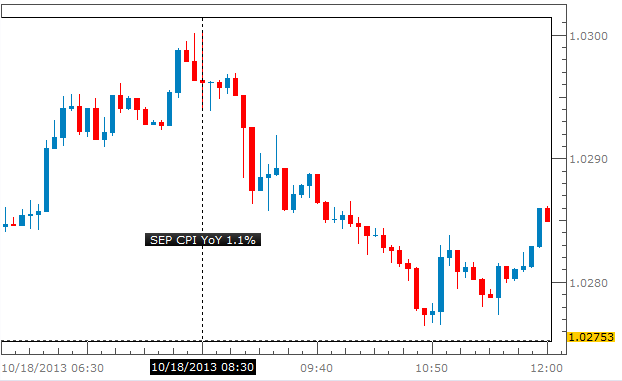 CPI data out of Canada showed September price growth at 1.1%, beating estimates of a 1.0% print. The USD/CAD pair weakened heading into the weekly close as pressure mounted on the greenback due to speculation of a delayed Fed taper- a result of the two week long US Government shutdown. The year over year print this time around is estimated to be a dismal 0.8% due to impacts from the shutdown in addition to a decline in fuel prices across the board. Sustained lower crude prices will continue to put pressure on inflation levels and may prompt dovish intervention by the Bank of Canada as the Federal Reserve looks to step back asset purchases over the next few months. Disappointing CPI prints moving forward do not bode well for CAD strength, especially in the context of a BoC that just removed pledges to raise rates in the future.