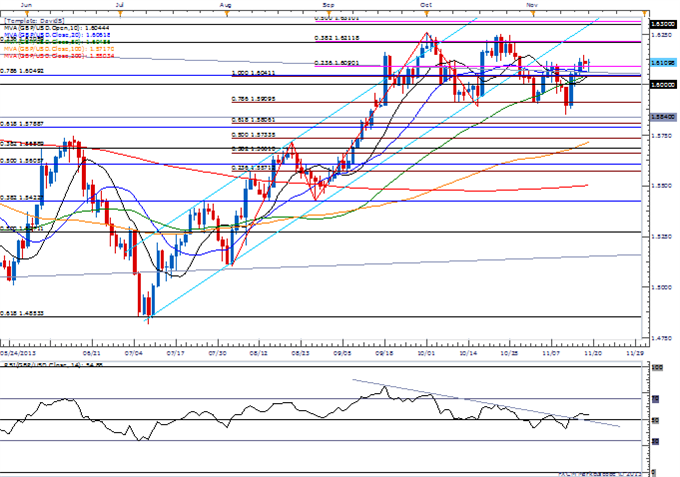 - Was There Talk to Shift Forward-Guidance? Will They Promote Stronger Cable?

The British Pound may make a more meaningful run at the 1.6300 handle in the days ahead should the Bank of England (BoE) Minutes spur a more material shift in the policy.

There’s growing speculation that BoE Governor Mark Carney will implement the exit strategy ahead of schedule in light of the stronger recovery, and the policy statement may highlight a growing discussion to lower the unemployment threshold as the central bank raises its outlook for growth.

The marked decline in unemployment along with the pickup in private sector lending may encourage the BoE to adopt a more hawkish tone for monetary policy, and the central bank may show a greater willingness to remove the highly accommodative policy stance earlier-than-expected as the region gets on a more sustainable path.

However, the recent slowdown in price growth paired with slump in household spending may prompt the BoE to retain a cautious outlook for the region, and British Pound may continue to face range-bound prices over the near-term as market participants weigh the outlook for monetary policy.

Minutes from the October 10th BoE rate announcement yielded little volatility following release, but the GBP/USD pair moved slightly lower before recovering towards the end of the daily close. Although better than expected data (and especially CPI numbers) have led some to speculate about a hawkish shift in forward guidance, mums the word continues to be the policy at Mr. Carney’s Bank of England. Positive incoming data was only mentioned in regards to evidence of a “robust” recovery and the BoE unanimously voted to maintain the asset purchase target of £375B with a record-low benchmark interest rate of 0.50% unchanged.