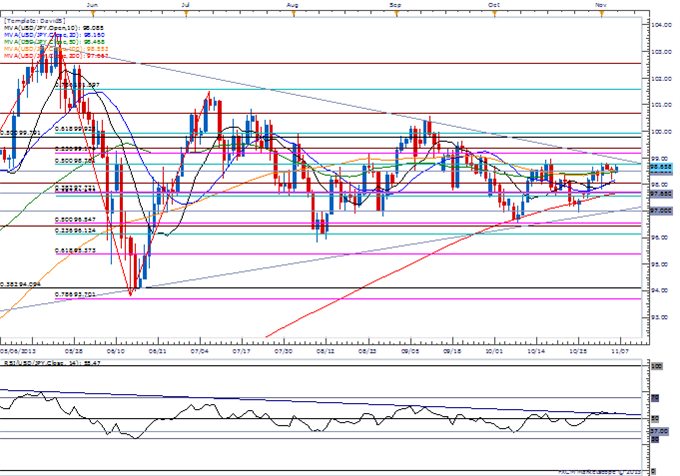 A slowdown in the U.S. economy may trigger a new round of dollar weakness as it raises the Fed’s scope to further delay the exit strategy.

Fears of a slowing recovery may encourage the Federal Open Market Committee (FOMC) to carry its highly accommodative policy stance into 2014, and the greenback remains at risk of facing additional headwinds over near-term as the fiscal drag continues to dampen the outlook for growth.

Indeed, the ongoing weakness in the real economy may ultimately lead to a weak GDP print, and the dollar may struggle to hold its ground ahead of Friday’s Non-Farm Payrolls print should the data undermine the taper-timeline laid out by Fed Chairman Ben Bernanke.

Nevertheless, the pickup in business outputs along with the elasticity in private consumption may help to limit the downside for growth, and a positive print may generate a more meaningful rebound in the reserve currency as market participants weigh the outlook for monetary policy.

*Trading the U.S. 3Q GDP print may not be as clear cut as some of our other trade setups in light of the European Central Bank (ECB) Meeting

Impact that the U.S. GDP report has had on USD during the last quarter

The U.S. economy grew an annualized 1.7% during the three-months through June, with Personal Consumption increasing 1.8% during the same period, but the first-quarter print was revised down to 1.1% from 1.8%. The dollar initially tracked higher following the better-than-expected GDP report, with the USDJPY spiking above the 98.50 region, but the greenback struggled to hold its ground throughout the day as the pair closed at 97.88.

Trade Key Event Risks with DailyFX on Dailyfx on Demand