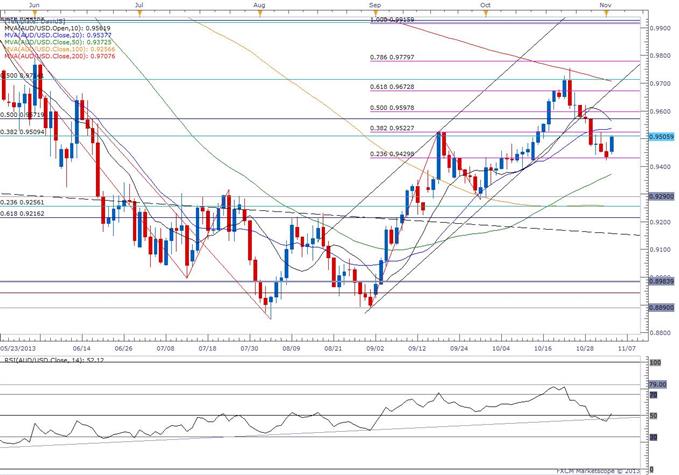 The Reserve Bank of Australia widely expected to retain its current policy in November, and the rate decision may prop up the Australian dollar as the central bank appears to be moving away from its easing cycle.

However, Governor Glenn Stevens may take a more stern approach in talking down the local currency to further assist with the rebalancing of the real economy, and stronger verbal intervention may limit the upside for the AUDUSD as market participants weigh the outlook for monetary policy.

Threats of an asset bubble may prompt the RBA to adopt a more hawkish tone for monetary policy, and the rate decision may fuel a more meaningful rebound in the AUDUSD should the central bank talk down bets for more easing.

Nevertheless, the ongoing slack in the real economy along with the weakening outlook for global trade may encourage the RBA to further embark on its easing cycle, and the Australian dollar may struggle to maintain the advance from September should the central bank show a greater willingness to implement another rate cut.

The Reserve Bank of Australia continued to strike a neutral tone for monetary policy after keeping the cash rate at 2.50%, but went onto say that ‘a lower level of the currency than seen at present would assist in rebalancing growth in the economy’ as the region continues to face an uneven recovery. Nevertheless, the Australian dollar traded higher following the rate decision, with the AUDUSD climbing above the 0.9350 region, and the higher-yielding currency continued to gain ground throughout the day as the pair closed at 0.9395.