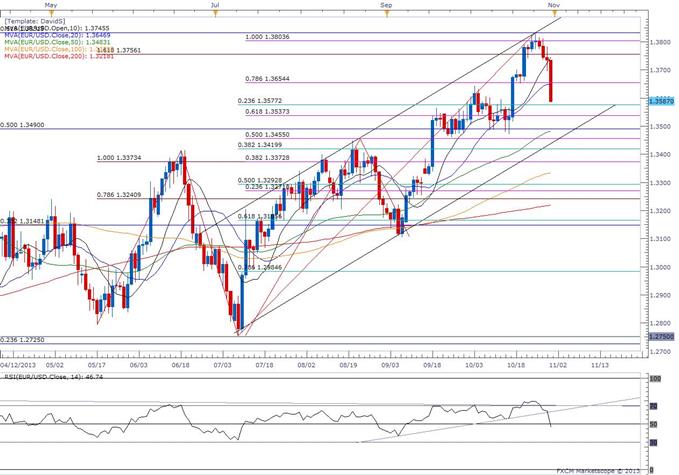 - U.S. ISM Manufacturing to Narrow for First Time Since May

A slowdown in the ISM Manufacturing survey may undermine the rebound in the U.S. dollar as it highlights a slowing recovery in the world’s largest economy.

Data prints coming out ahead of the Fed’s December 17-18 meeting may continue to skew the policy outlook as the central bank pledges to ‘closely monitor incoming information on economic and financial developments,’ and we may see the Federal Open Market Committee (FOMC) ultimately carry its highly accommodative policy stance into 2014 to further combat the downside risks for growth and inflation.

The persistent slack in the real economy may prompt businesses to scale back on production, and a marked decline in the ISM survey may encourage the FOMC to further delay its exit strategy in an effort to encourage a stronger recovery.

Nevertheless, firms may increase their outputs amid the elasticity in private sector consumption, and a positive print may foster a more meaningful rebound in the dollar as market participants weigh the outlook for monetary policy.

The ISM Manufacturing survey unexpectedly increased to 56.2 from 55.7 in August, with the employment component advancing to 55.4 from 53.3 to mark the highest reading for 2013. Despite the choppy reaction, the dollar edged higher throughout the North American trade, with the EURUSD ending the day at 1.3524.