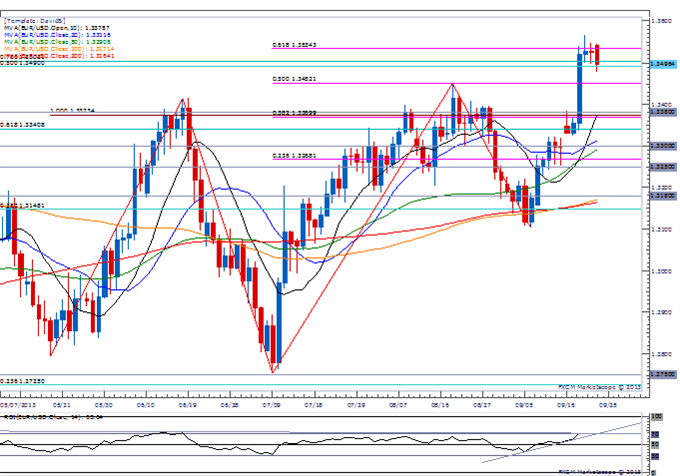 USD at Risk for Further Losses as Consumer Confidence Wanes

- Conference Board’s Sentiment Survey Has Held Above 80 Since May

A decline in the U.S. Consumer Confidence survey may prompt a bearish reaction in the U.S. dollar as it dampens the prospects for a stronger recovery.

As a result, a dismal development may also dampen the prospects of seeing the Federal Open Market Committee (FOMC) taper its asset-purchase program at the October 29-30 meeting, and the central bank may continue to delay its exit strategy in an effort to further insulate the world’s largest economy.

The slowdown in private sector credit along with the ongoing weakness in the labor market may drag on household sentiment, and a marked decline in the survey may further diminish the appeal of the USD as the central bank sticks to its highly accommodative policy stance.

Nevertheless, the more broad-based recovery in the U.S. economy along with the pickup in wage growth may prop up consumer confidence, and another uptick in household sentiment may encourage a more meaningful rebound in the greenback as it raises the arguments to scale back on quantitative easing.

For Full Coverage of the U.S. Consumer Confidence survey, Join Analyst on Demand

Bearish USD Trade: Conference Board Survey Narrows to 80.0 or Lower

Impact that the U.S. Consumer Confidence survey has had on USD during the last month

U.S. consumer sentiment bounced back in August, with the Conference Board survey advancing to 81.5 from a revised 81.0 the month prior, while 67.9% of respondents anticipate higher borrowing costs going forward as the Fed looks to taper its asset-purchase program in the coming months. The initial market reaction was short-lived, with the EURUSD quickly trading back above the 1.3380 region, and the greenback continued to consolidated throughout the day as the pair closed at 1.3390.