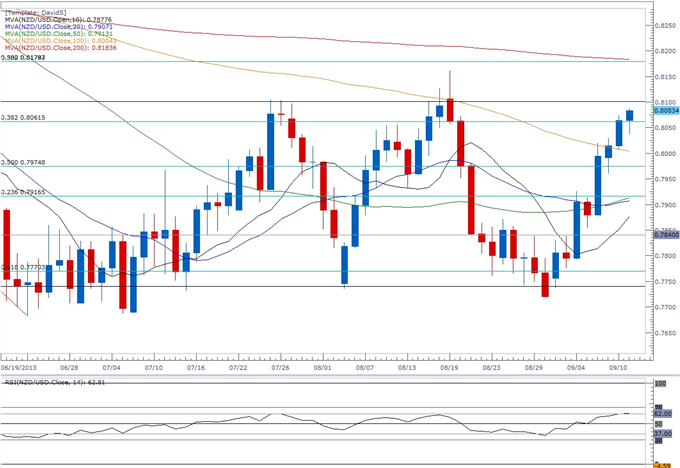 NZDUSD Poised for Bullish Breakout as RBNZ Looks to Normalize

The Reserve Bank of New Zealand (RBNZ) is widely expected to keep the benchmark interest rate at 2.50%, but the fresh batch of central bank rhetoric may spark a bullish breakout in the New Zealand dollar should Governor Graeme Wheeler adopt a more hawkish tone for monetary policy.

Indeed, the central bank head may highlight a greater risk for an asset bubble as the economic recovery gathers pace, and the RBNZ may show a greater willingness to start normalizing monetary policy as households and businesses continue to take advantage of record-low borrowing costs.

Rising home prices along with the ongoing pickup in private sector credit may raise the risk of seeing a housing bubble, and Governor Wheeler may show a greater willingness to lift the benchmark interest rate off the record-low in order to balance the risks surrounding the region.

However, Mr. Wheeler may make further attempts to limit the strength in the New Zealand dollar amid the slowdown in global trade, and the central bank head may continue to employ verbal intervention to encourage a help address the trade deficit.

As expected, the Reserve Bank of New Zealand retained its current policy in July, but showed a greater willingness to start normalizing monetary policy and said that ‘the extent of the monetary policy response will depend largely on the degree to which the growing momentum in the housing market and construction sector spills over into inflation pressures’ amid the growing threat of an asset bubble. Indeed, the New Zealand dollar pushed higher following the rate decision, with the NZDUSD climbing above the 0.7975 region, and the higher-yielding currency continued to gain ground throughout the day as the pair closed at 0.8076.